Hanging Out With TAWINGS – Life Begins At The Hop

TAWINGS is like a volcano. No one knew about them until last year, when from out of nowhere they erupted onto the Japanese music scene, after which there was simply no escaping them. I hate name-dropping but they just opened for Japanese Breakfast last December and Ty Segall this past March and have played numerous underground parties in the Tokyo indie scene with up-and-comers like Maika Loubte and Luby Sparks. Now, they are here at SXSW, playing to potentially hundreds of thousands of foreign people. When people ask me how these girls got the chance to open for all these notable indie bands with only four tracks available online, I tell them “Go listen to those four tracks and you’ll know the answer.”

With that being said, I was still very curious about their background as well as what made them so unique. Cony Plankton (vocals) told us she was born in a very musical family and was classically trained in piano. The other three girls also have experience performing music from playing in other bands before TAWINGS, though some of them still hold a daytime job to make ends meet. Like these stories often go, two of the girls met at a live show and spontaneously decided to form a band. Then another girl joined. Then another. It finally became something serious.

Talking about this trip to SXSW, they were excited that this was their first time coming to America to play some music. When asked about their first impression of America, they said it was just like they had imagined it would be. It seems that Austin has done a great job keeping up to the international reputation of America – whatever that is. They looked happy to be in Austin though. What made them even happier was when we started talking about music. When I asked what songs they were listening to on their music players right now, they showed me their cellphone screens with a variety of artists ranging from 70s English punk quartet XTC to Taiwanese up-and-coming indie pop outfit Sunset Roller-coaster. Eliy, the bassist, strongly recommended the band “Sure” to me, saying they saw their performance at SXSW and loved the band. Not knowing the band, I half-heartedly complained about how bands’ names are so hard to search for on the Internet these days and they giggled. I later found that Sure was a great band, for sure.

I told TAWINGS that I’ve known their friends DYGL (another band playing SXSW this year — check out our interview with them here) since 2015 and they were my start point of listening to modern Japanese indie music. Through DYGL, I became familiar with brilliant artists like Cairophonomenons, Maika Loubte, and Happy. As I heard that TAWINGS and DYGL were close, I wondered if this relationship influenced TAWINGS’ songwriting in any way. Of course I didn’t want to sound like I was indicating that this was the reason they were successful; I certainly didn’t think that was true. But the girls were very open on this topic, admitting they sometimes would get advice from fellow bands like DYGL about live performances and touring overseas. While they told me that they are always open to suggestions, TAWINGS are very independent when it comes to making songwriting decisions. Cony stressed that it was very important to keep the band pure and devoted in terms of music. 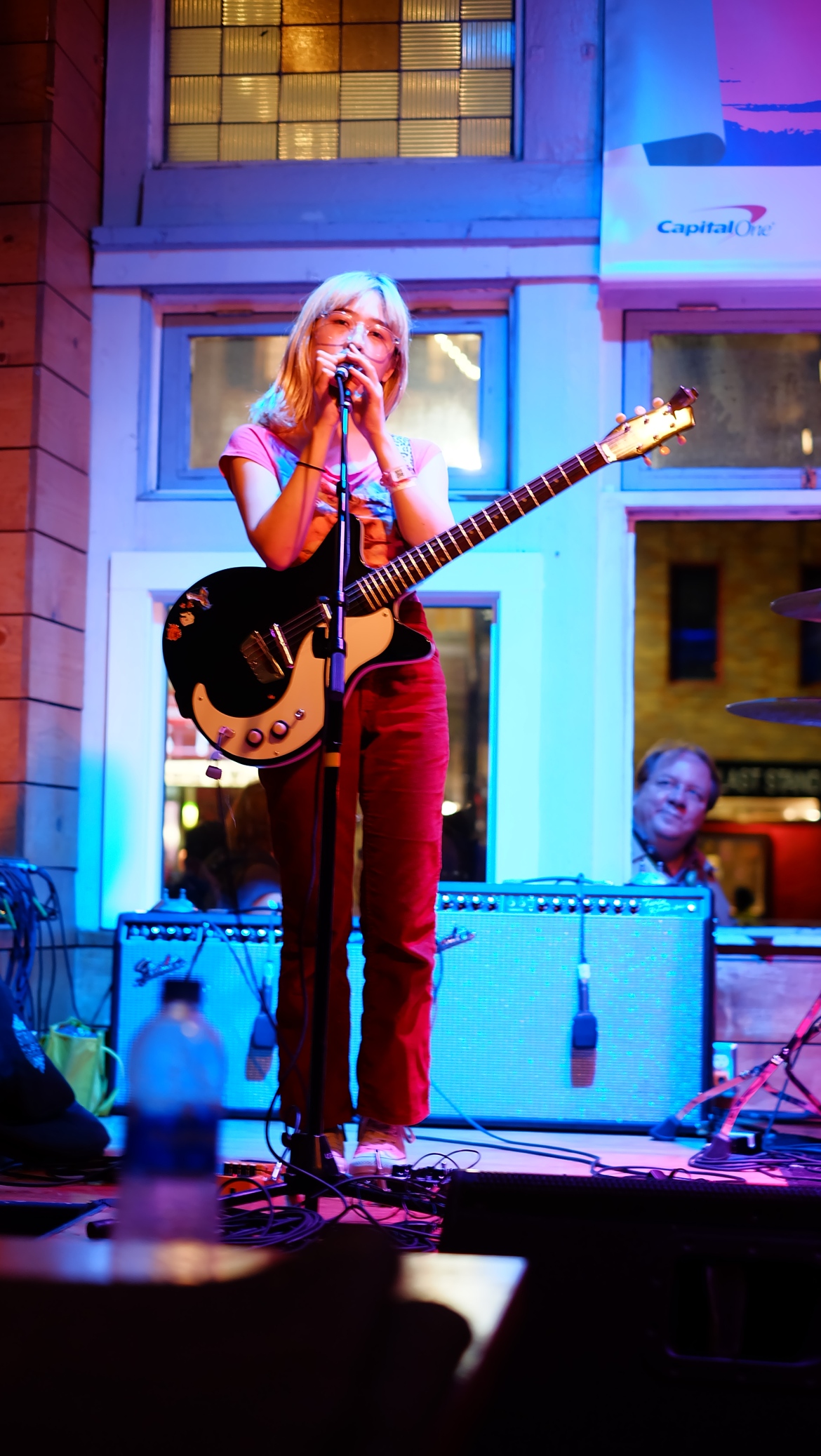 All-girl bands have always been rare, especially indie punk bands as original as this one. Although all four girls are very pretty, they did not use their looks to take the easy way out. “Besides idol groups, of course there are some girl bands out there like SCANDAL and Perfume, but that’s a completely different vibe from the way we like.” Cony said. Indeed, if you take a good look at the Japanese music industry, you will realize how girl bands are packaged into varieties of genres so they can be marketed to certain target audiences, who mostly have a preference on the genre of “appearance” rather than music.

Though TAWINGS have not released many songs so far, they have promised to release a full album at some point this year. Yurika, the drummer, said she might still need to work during the day but plans to meet with the rest of the band in the studio at night to record the new album. Recently, they’ve played many gigs so those were good practice, too. However, when asked what her ideal day would be, Kanae, who is also the vocal of the band, answered softly, in an uncertain tone, “It would be nice if I could simply get up, have some tea and play my favorite record.”

Before they were heading to see La Luz, TAWINGS took us to a nearby record store called “End Of An Ear”. We did some photo shots there but apparently the gals were more into vinyl and cassettes than our camera. As a thank-you gift for joining our interview, KKS offered each member a record of their own choice and I was curious what artists they would pick. They did not let me down. Cony got “Perverted by Language” by the Fall (R.I.P. Mark E. Smith). Kanae picked out Deerhunter’s classic “Halcyon Digest”. Eliy also chose an early work – “She Hangs Brightly” by Mazzy Star while Yurika creatively settled on a live album of Judee Sill. I did not walk out of the record store empty-handed either. Our sweet photographer bought me a cassette of “In The Shower” from Homeshake.

It was time to say goodbye. I hopped on the cab and didn’t look back, knowing that I would see TAWINGS again very soon. 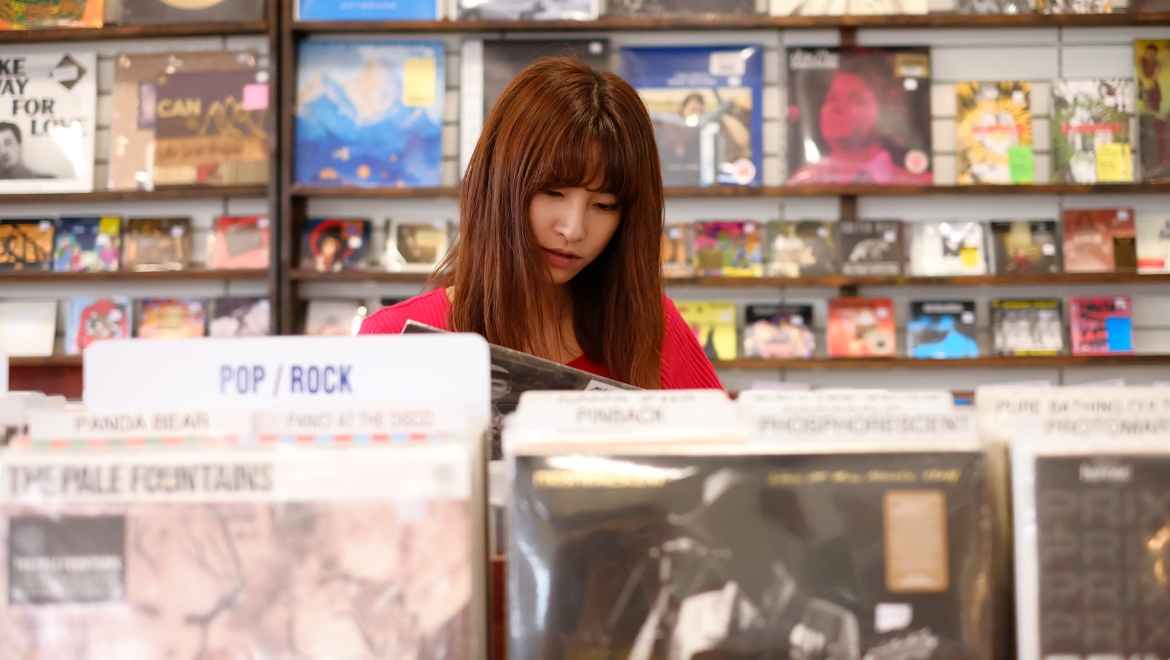