If you live in Los Angeles, California, then you have a chance to watch Ayumi Hamasaki‘s A3D Arena Tour ~Next Level~ and Rock ‘n’ Roll Circus Tour ~7days Special~ 3D concert movies! Just judging from the different types of ticket options, these are two different movies and you have two chances to catch either one or both for two days only! You can pre-purchase your tickets right now at http://a3d.eventbrite.com/ 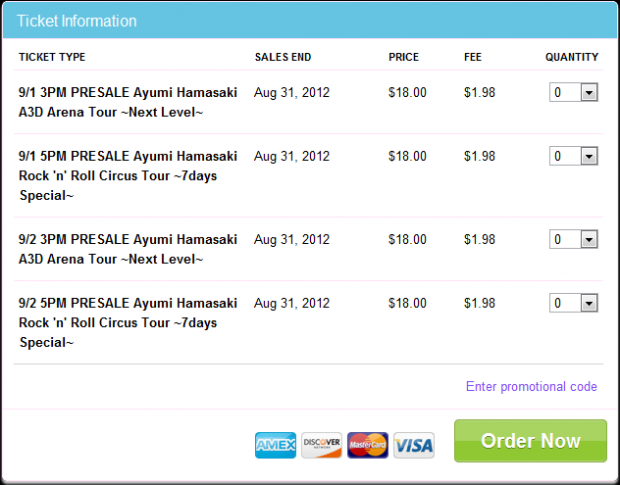 The screening will take place on September 1st & 2nd at 3:00PM at the Downtown Independent.

“Watch this megastar’s electrifying performance and elaborate show features exclusively in high-quality full 3D and experience the live concert in the US for the first time!

In 2009, Ayumi Hamasaki went on tour for the ARENA TOUR ~NEXT LEVEL~ that attracted more than 300,000 fans at 35 shows, in 12 cities throughout Japan. Performing all of her hit songs from the past to present, Ayumi’s dance performances and vocals will have you on the edge of your seat!

This year, ARENA TOUR ~NEXT LEVEL~ 3D has received the high honor of 3D Creative Arts Award from the International 3D Society alongside Martin Scorsese’s, “Hugo”.

ROCK’N’ROLL CIRCUS TOUR FINAL ~7DAYS SPECIAL~ is the part II of her 3D live concert series in which the final 7 days of the tour were documented into an emotional montage of laughter and tears.

Share the excitement and thrill of watching Ayumi Hamasaki in 3D! With quality sounds and popping visuals, you will feel as though you are there in the moment!

*Ticket prices for each screening: Advanced sale tickets $18 / At the door $25

(Tickets at the door are cash-only)

Official Ayumi Hamasaki gifts would be distributed to all participants!” – Event Brite

For more information or to purchase your tickets, head to http://a3d.eventbrite.com/