THE past Halloween weekend in the U.S. and Japan was celebrated in a special way — besides cosplaying and massive parade, both countries saw a simultaneous theatrical premiere of Japanese Pop Group Perfume’s first feature documentary “WE ARE Perfume -World Tour 3rd DOCUMENT-”. Perfume fans gathered in their nearby theaters and watched their favorite music group’s growth and evolution, finally to find themselves cheering for the girls in tears and motivated by Perfume to fight for their own lives. An inspiring and memorable Halloween weekend spent with Perfume and fellow fans, hopefully we could celebrate holidays more in this way. 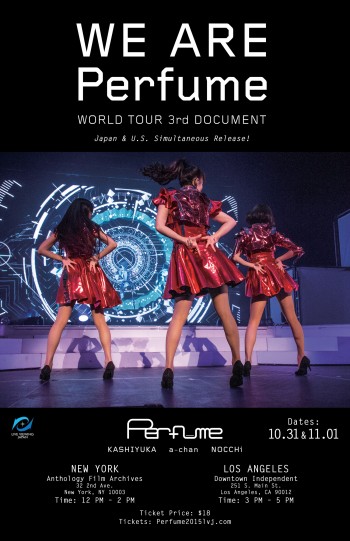 The documentary received U.S. premieres in New York and Los Angeles on two consecutive days, October 31st and November 1st, presenting to the audience Perfume’s true and gentle emotions in a mixture of smile, confusion, excitement, as well as tension during the two-month international live tour. Following the whole tour from Taiwan and finally to New York through the film, while feeling the energy and encouragement from Perfume all over again, fans were especially excited and proud to see the cities and shows that they personally went to got captured by the lens. In Downtown Independent theater, the premiere location of Los Angeles, the audience burst into applause from time to time during the screening, when some of the fans surprisingly saw themselves appear in the movie scenes. To star in the same film with fans and to show that they are growing together with fans, I guess that is Perfume’s way to show gratitude to those who have always been supporting them no matter what. And for fans who just LOVE Perfume, they would do their best for the girls because Perfume deserve it.

★Kawaii Kakkoii Sugoi would like to express our appreciation for Perfume Street Teams in Los Angeles and New York for their great contribution to the documentary premiere events in both cities. Thank you so much for your help and definitely looking forward to working with you guys next time! <3 <3

★We also want to say thank you to two of Perfume fans who flew from other cities for the LA premiere, Ray from Seattle, Nicole from Michigan and Charles from Louisiana. Thank you so much for your support to Perfume and Kawaii Kakkoii Sugoi! We are looking forward to seeing you soon again! <3 <3

AND!!!…… We are so surprised to find this (photo credit on the picture): 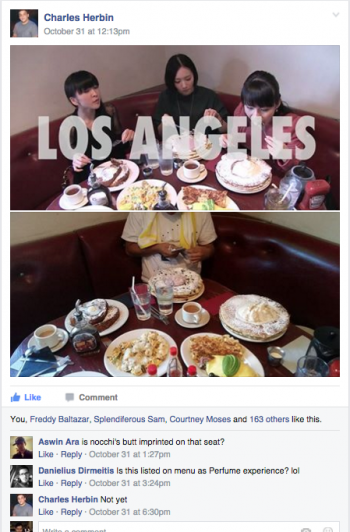