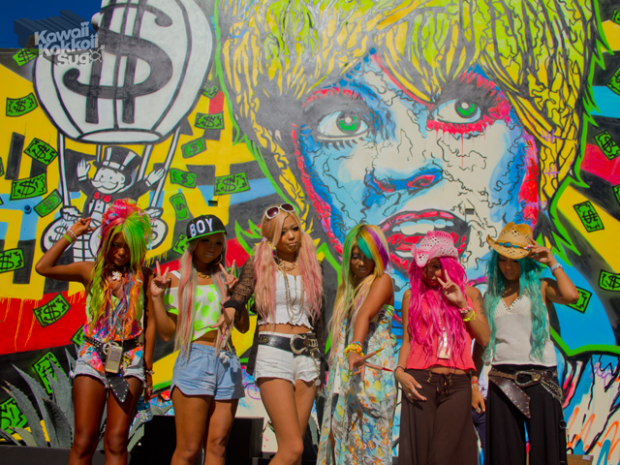 J-Pop Summit is this weekend and we’re very excited to be sitting down with 6 out of 150 members of the “Kuro-Gyaru” fashion group called Black Diamond! Their styles and looks are considered outrageous in Japan but are well received in foreign countries, especially here in the states. They are planning to launch a new apparel brand called GALEO which will be available to not only Japanese gyarus but also foreign gyarus. (That means more sizes are available for the western culture!) The clothing are coming the end of this month. In addition to coming to the states and promoting their fashion, they will be debutting their music as well. Check out below our interview with our talented guests!

KKS: Before we begin, let’s go around the room and introduce yourself along with one thing you would like our readers to know about you personally.

Erimokkori: Hi, I’m Erimokkori. My name came from a popular character from Hokkaido, Japan called Marimokkori. It’s my favorite character so I added “mokkori” to my name. Erimokkori.

Yun: Hi, I’m Yun. Out of the entire group that is present, I am the darkest. I go tanning twice a day, 45 minutes per session. But I have to go to a different salon because each salon only has a 45-minute limit. 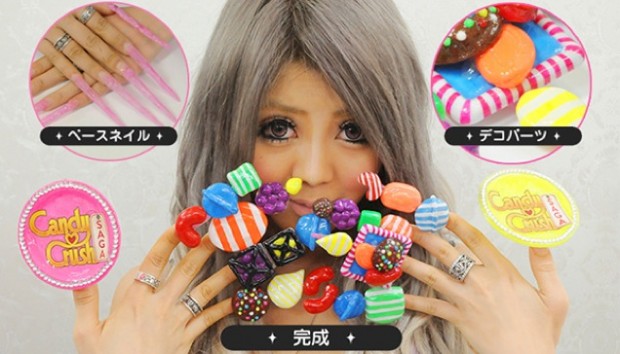 Rise: Hmm… I don’t have any sales point. Haha.

Manager: Yes you do! You are the producer of the new apparel brand, GALEO!

Mayuchibi: I’m Mayuchibi and I am a certified calligrapher and I did the logo for the television show in Japan called “Wonder Japan.” It’s a program that will be broadcasted on TokyoMX TV that will introduce our wonderful Japanese culture. Also, I will be doing the calligraphy performance at J-Pop Summit!

Manager: She’s also the best Para-Para dancer in this unit!

KKS: How did “Black Diamond” came to be your girl group’s name?

Everyone: It was spontaneous… It’s a misconception that people think we tan because we want to look like African, but really, we just love tanning. Like real black diamonds, we want to be unique and rare!

KKS: What is the purpose of “Black Diamond?”

Manager: It was a very popular fashion in the 90s to the point where there were frequent meetups. However, the fashion is declining so this group exist to keep the culture alive.

KKS: Keeping the culture alive and spreading it the same time must be very difficult. What sorts of challenges do you face and what keeps you motivated?

Harutamu: Keeping up the look is expensive. From the hair, to the nails, to the clothes, etc. Like Yun mentioned, she has to tan twice a day so it’s hard to maintain the appearance. Also, people in Japan are very conservative and since we stand out, we get a lot of mean comments. 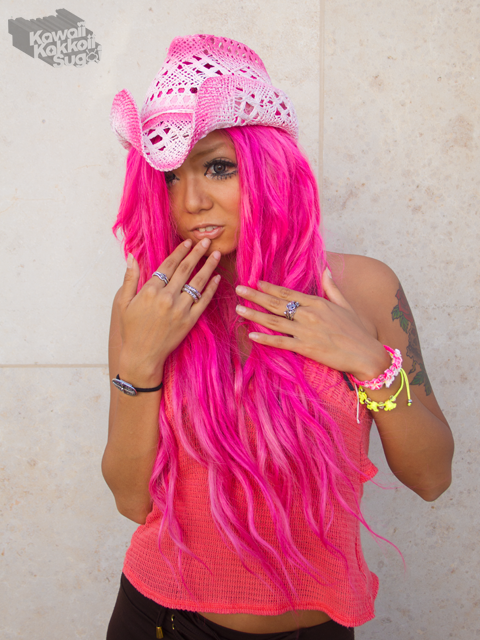 Rise: However, we love the fashion so that’s our motivation!

Mayuchibi: There are many girls who are younger than us in Japan that look up to us though. Also, Europe and the US are really accepting of our fashion!

Manager: Not hip hop, not rap, but electronic dance!

KKS: EDM? That’s very popular in the US right now! What other genre fits well with your fashion?

Harutamu: I would say… pop because we’re colorful and really fit the summer mood!

Manager: They will all be dancing and singing at J-Pop Summit. Please check them out on the Discovery Stage, Saturday July 19th, 2:20PM and again on Sunday, same time. Also, on Sunday 12:00PM, they will be performing on the main stage!

KKS: Speaking of performance and J-Pop Summit, have you performed live before?

Pomi-tan: We have. We perform at clubs in Japan every other month.

Manager: J-Pop Summit will be their US Debut!

KKS: What are each of you looking forward to at J-Pop Summit?

Harutamu: I’m very excited to meet Tomomi Itano! (Tomomi is the most popular formal member of AKB48.) I’m a very big fan of her. The last event we went to in Paris had 30,000 attendees and I heard J-Pop Summit will have 80,000 so I’m looking forward to seeing everyone! 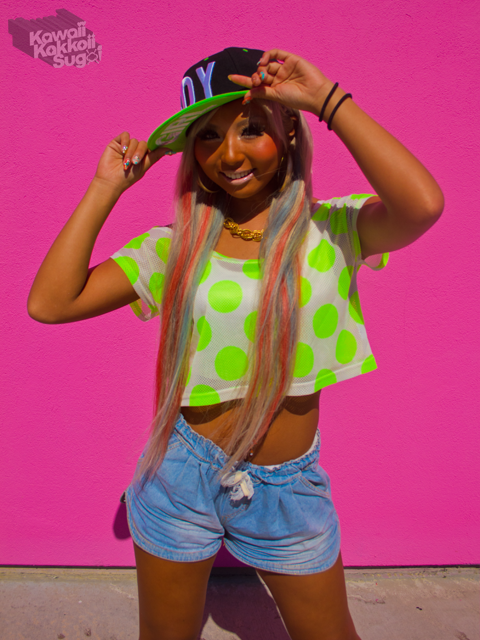 Mayuchibi: This will be the second time I will be doing calligraphy outside of Japan so I’m very excited to perform this art at J-Pop Summit! I will be creating our backdrop in which we will perform in front of on Sunday!

Pomi-tan: I look forward to our audience. It will be fun!

Eri & Yun: It’s our first time outside of Japan actually… So everything is new and exciting!

Manager: A police officer took a picture of Eri in front of the Hollywood Sign.

Harutamu: Yes, we get treated like super stars here! Many people want a picture with us and our autographs. It’s amazing!

KKS: Thank you so much for this interview! Good luck at J-Pop Summit!

Again, you can catch Black Diamond this weekend at J-Pop Summit! I got to hang out with these girls during our photo shoot and they are wonderfully nice! Black Diamond weren’t kidding when they said they are like superstars here. Many people on the streets stopped and took a picture with the girls. They even took a picture with the owner of Paul Smith and the street artist, ALEC, in West Hollywood! Check out our gallery below!

For more information about Black Diamond and J-Pop Summit, visit: