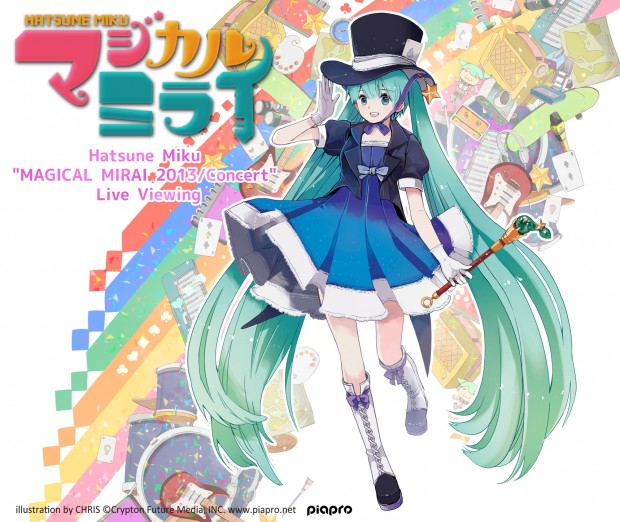 Exciting news! Live Viewing Japan will be having a delayed broadcast of Hatsune Miku MAGICAL MIRAI 2013 Concert during Miku’s birthday in several parts of the world.

On August 30th, 2013, fans in Japan will celebrate Hatsune Miku’s birthday with a very special event called “MAGICAL MIRAI 2013″ at Yokohama Arena. When reading the title, it may just appeared to be ordinary words to non-Japanese speakers. However, it is actually a play on words! Here’s the breakdown:

MAGI, or Maji (‘serious’ in Japanese): More concert than ever!

CAL, or Culture: The creative CULTURE of HATSUNE MIKU

MIRAI, ‘future’ in Japanese): The FUTURE

MAGICAL MIRAI is a one day art festival for fans to enjoy “all about HATSUNE MIKU.” These three categories are also spots for Miku fans to visit. MAGI Area is the stage for the performance. CAL Area is the gallery & workshops fans can see Hatsune Miku’s history and exhibition by various creators in addition to a workshop everyone can participate in. Lastly, MIRAI Area, an Exhibition Space where Hatsune Miku Goods are available!

Fans outside of Japan will rejoice to hear that they, too, can participate a third of the MAGICAL MIRAI festival by attending one of the participating theaters to watch a delayed broadcast of the concert courtesy of Live Viewing Japan! This is an exciting event as fans from all over the world will gather to celebrate together Hatsune Miku’s birthday!

Los Angeles and New York City are two of the participating cities that will host this exclusive showing! Tickets are on sale now, details below!

You can bet your butts we will be there so come by and say hi to us and get free pins & stickers! 😀