Interview With VAMPS Before Los Angeles Show on April 11th,... 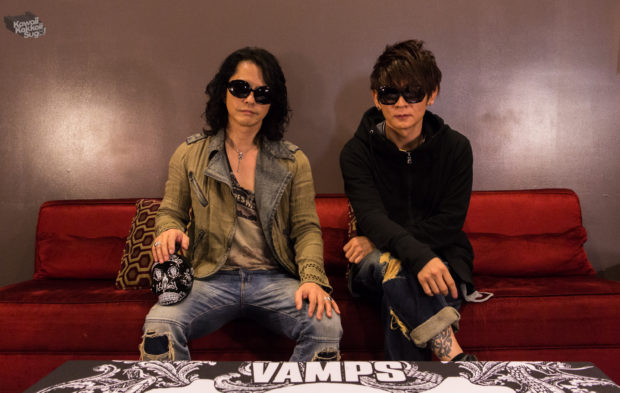 Kawaii Kakkoii Sugoi sat down to talk with VAMPS before their show with Sixx:A.M. at Club Nokia in Los Angeles on April, 11th, 2015. Check out what VAMPS think about Sixx:A.M. and the American tour with them:

1. Welcome back to the US! It’s been 1 year and 4 months since the last time you performed here. Thank you for coming again.

We and your American fans have missed you very much.

2. I heard that Motley Crue is one of the bands that influence the way that HYDE writes music so what was it like to perform with Nikki Sixx at VAMPARK Fest in February?

—HYDE: At first I was not sure if he really would actually come to perform at VAMPARK Fest. I was a bit concerned about that. But actually he was frank and nice when talking with me. It was great to find out that he was a very nice person. 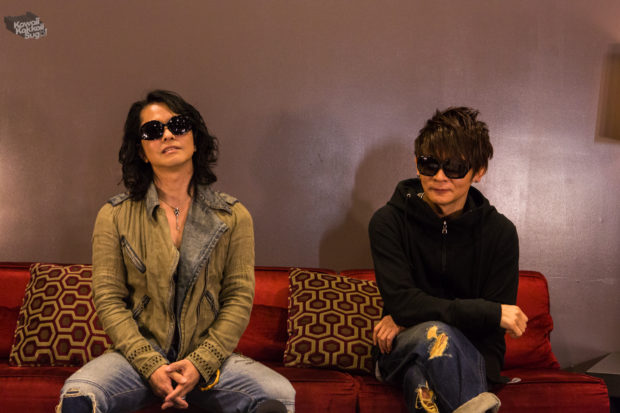 How did you feel about sharing the same stage with him?

—HYDE: It felt like in a dream when I performed on the same stage as him. Kind of unbelievable to me.

3. For next year’s VAMPARK Fest, which international bands do you have in mind to invite?

—HYDE: Let me think… who would it be? I like ISSUES. I would like to invite them.

—K.A.Z: Well… musicians I would want to invite to VAMPARK Fest… Hmm… I think it would be interesting to invite bands we used to listen to. For example…

4. Although you’re not done touring with Sixx:A.M. yet, how has it been so far? Have you gained any new experiences?

—HYDE: Because it’s their (Sixx:A.M.’s) show, we can’t put on a bad show when touring with them. Therefore, we get more aware of what we should do. I think this is a very good direction where we should go. Touring with Sixx:A.M. is a great chance for us to grow as a band.

Do you want to tour with them again if possible?

5. So far, which song got the most positive reactions from the Sixx:A.M. fans?

—HYDE: What would it be? Isn’t it Live Wire? The crowd got excited when we played Live Wire. In addition to that, … WORLD’S END! I’ve heard that people also enjoyed this one.

6. Are there any differences touring with an American band instead of a Japanese one?

—K.A.Z: We admire Western/American music and musicians ever since many years ago. When we actually came to the U.S, we found the audience here completely different from our audience in Japan, which was really a great impetus to us. I do not mean it in a bad way, but to be honest I feel more relieved when we perform in Japan. Having said that, when performing overseas, I feel like we go back to the feeling in the earlier days of our career, as if we just start our band and everybody does his best to perform shows and to grow into a bigger band.

I see. Thank you so much for another interview. We are looking forward to your show tonight as well as your headline show in New York in May!

VAMPS will continue their tour with SIXX:A.M. through April, capping off the tour with an extended headlining show at New York City’s Best Buy Theater on May 1.

Tickets for the New York show are on sale now at AXS.com.