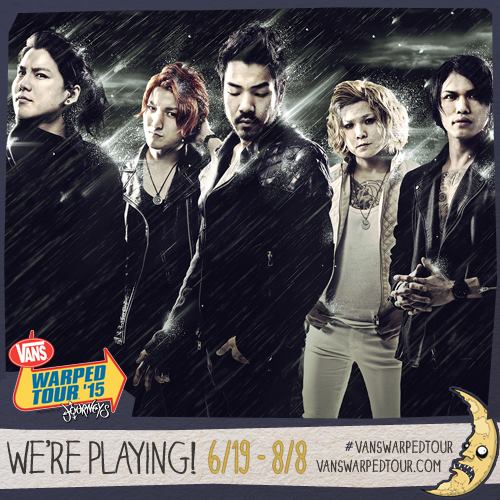 Crossfaith (クロスフェイス) are a Japanese metalcore band from Osaka that was formed in 2006. The band released their first demo “Blueprint of Reconstruction” in 2008. The band consists of vocalist Kenta Koie, guitarist Kazuki Takemura, Hiroki Ikegawa on bass guitar, drummer Tatsuya Amano and Terufumi Tamano on keyboards. They are renowned for their fusion of metalcore with electronic dance music, and for their intense live performances.

In their early touring history they supported bands like: Hatebreed, Machine Head, In This Moment, Bleeding Through, etc.  In March 2011 Tragic Hero Records signed Crossfaith for an American release of their second album “The Dream, The Space”. In 2012 Crossfaith’s tour schedule for around the Europe expanded, supporting Of Mice and Men with Bury Tomorrow and later in the year supporting While She Sleeps alongside Bleed From Within and Polar in September. In August the band went to Japan to play the Summer Sonic festival, the largest festival in the country, where they played to 10,000 people.

On 10 November, 2012, the band performed at the 2012 Warped Tour at the Alexandra Palace in London on the ‘Kevin Says Stage’. The stage they played on was only a 500 capacity room but security had to block the entrance to the room as it exceeded capacity during their performance. Their performance at the festival garnered a lot of attention for the band.

On 4 February 2013 the “Zion” EP was released in Europe by Search and Destroy Records and just a few days after that the extended play was streamed online at SoundCloud. Crossfaith performed at the Australian 2013 Soundwave festival for all 5 dates in: Brisbane, Sydney, Melbourne, Adelaide and Perth between 23 February and 4 March. They also announced Sidewaves shows prior to the festival dates with Periphery.

Then, in May the band was the main supporting band on Bring Me the Horizon‘s headline tour of the United Kingdom. After their tour with Bring Me the Horizon they performed two headline shows at the Barfly in London and the Sugarmill in Stoke. But due to the success of the London show, they upgraded the venue to the Camden Underworld. Their performances were praised as offering “constant energy” and Amano Tatsuya’s drum solos as “stunning”. This show was at the Underworld just a year after their show there supporting Of Mice and Men. Across July and August, Crossfaith toured the United with Warped Tour. Crossfaith released their third studio album Apocalyze in Japan on 4 September 2013 and on 9 September in the United Kingdom.

On October 8, 2014, the band released a three track long single titled “Madness.” The track listing consists of the three songs: “Madness”, “Dance with the Enemy”, and “S.O.S.”

The band has announced their schedule with 2015 Van Warped Tour, and they will be supporting two shows of another popular Japanese rock band, ONE OK ROCK’S domestic tour in Japan.

~Much like The Prodigy and Slipknot for the generations before them, it is genuinely not an exaggeration to say that Crossfaith have already began garnering a reputation as the world’s must see live act. Got your attention? Good. This is not a drill and this is not hyperbole. This is the real thing; a once in a generation experience that has already got all continents of the globe picking their jaws up from the floors, no matter what their musical genre of preference might be. The energy is infectious, the excitement is undeniable and the visual power the band bring to the stage night in, night out doesn’t require fancy lights or dragons jumping out of the PA to get your blood pumping like a porn star on heat. “So many of the bands in our scene, we like to listen to on CD but live it can be really boring,” says livewire frontman Kenta Koie. “In Japan, there are lots of typical hardcore bands and punk rock bands and that’s cool but we always wanted to be something more than just those bands playing to those kinds of fans. We always admired the stadium rock bands and that they always put on a show. You wouldn’t go home and forget what you had just seen. You can do that no matter what size venue you’re playing and make people remember you. It’s bullshit to be boring!”

Having spent the past few years in their hometown of Osaka, Japan honing their craft into a neon explosion that fuses the fist-pumping euphoria of hard-hitting dance with the rabid intensity of punk rock and metal, the task at hand has been channelling this once-in-a-generation live experience into a once-in-a-lifetime album. Enter ‘APOCALYZE’; the kind of album that reignites your faith in originality in the worlds of dance and rock and puts that extra yard of pace into your step every time it blasts through your headphones. Produced by US heavyweight producer Machine (Lamb Of God/Four Year Strong), the man who helped capture the band’s sound on their breakthrough ‘Zion EP’, ‘APOCALYZE’ is everything you could wish for on a debut album and a whole world more. It showcases the kind of fearless experimentalism that only comes from a band with nothing to lose and a level of craft that far outweighs their diminutive years. “We wanted to show the world everything we could do,” says Ken. “We’ve worked really hard at putting together an album that shows many different sides of us. We thought that Machine understood us when we worked on our EP and we wanted him to bring more of that knowhow to our album.” Indeed, for a band that has already shown a whole host of musical dexterity and eclecticism on their EP, there are a hell of a lot of firsts for Crossfaith on their debut album. While the likes of ‘Hounds Of The Apocalypse’ and the phenomenal ‘Eclipse’ see the Japanese mavericks reaching new heights within the perimeters of their established sound, there are moments that push the boundaries of what the band can do further than ever before. Every track cracks with a livewire energy that’s so rare to find in today’s music scene. ‘Countdown To Hell’ brings a new dimension of metallic riffing to the fold whilst on ‘Scarlett’ a female vocal from Bianca Roman takes Crossfaith’s euphoric dance flavours beyond the stars and into a different stratosphere altogether. “We thought we could do more,” says a refreshingly honest Ken. “We never want to just do what we’ve done before. It’s boring. We wanted to try different things and explore new things. Having a female vocal was different and fun and made the song much better.” It’s not just musically that sees ‘APOCALYZE’ extending Crossfaith’s evolution. Though there are plenty of futuristic themes explored and words intended to set dancefloors and moshpits alike ablaze, the album’s closing track, ‘Only The Wise Can Control Our Eyes’ enters a different lyrical realm entirely. It’s a narrative that inspects the intricacies of 2012’s Kamaishi earthquakes and the devastation inflicted upon the band’s homeland. “It wouldn’t be right to be a Japanese band and have something like that happen and to just ignore it,” Ken explains. “It was something you couldn’t escape and we had to use our album to say something on how it affected us and everyone around us. In leaving people with something to think about, it felt like it was a good place to end the album.” “The title ‘APOCALYZE’ is all about the beginning and the end,” continues Ken. “It’s about destruction and reconstruction of the world and talking about how ‘We Are The Future’ on a track at the beginning of the album but also ending saying that things like the earthquake can be the ending of the world. Everything has a beginning and an end.” You had better believe that ‘APOCALYZE’ is just the beginning for Crossfaith. With a sound that grabs you by the lapels and demands that you move, this feels like the start of a revolution. In the years to come, there may be a million bands that sound like Crossfaith. Just remember that it all started with ‘APOCALYZE’. “We’re excited to take our sound around the world,” summarises Ken.“It started in Japan but it feels like everyone is responding to it wherever we play.” The revolution starts now.