This is actually just another recommendation series in disguise, just not presented typically. Instead of just telling you what an anime is about or why you should watch it, each anime will be personified and if that person sounds interesting to you then you might be into the anime. There’s no rhyme or reason to this other than the portrayal of each anime being based how I perceive the fans perceive the anime. Convoluted and ultimately unnecessary, I know but let’s see where this first attempt takes us and go from there. Also, the article would be pretty bare without any pictures so I’m going to include some but they should only serve as a basis on whether or not you like the art style.

Evangelion is the kind of guy whose friends are REALLY into him and hold on to his every word as if it were holy script. This is of much surprise to Evangelion as he doesn’t believe he’s saying anything especially thought-provoking but soon the popularity and worship gets to him and eventually believes he has transcended humanity (heh) and decides to share his “wisdom” and “art” with the rest of the school. It was an extremely arty piece that either completely went over people’s minds or overanalyzed by his die-hard fans at the time. This ultimately splits his group of friends where some defend his act vehemently and others believe he’s gone mad. He ultimately cuts off his relations with everyone saying that no one understands him and eventually graduates as the weird kid from high school. However, in college, he decides to redesign himself with a better wardrobe and a more casual view of life and eventually becomes popular again; not with just with the like-minded people from high school but a more general popularity with all kinds of people.

He’s a funny guy. He’s always on point with his jokes and is loved by many. His take on current society is actually thought out and accurate, which you wouldn’t assume from this guy.  However, he has a terrible secret about himself. He doesn’t try to hide it but rarely anyone ever asks him about it. Those who do know the secret can never look at him the same way again and the jokes he’s told throughout high school have gained a sinister side to them. Basically, it’s best to stay acquaintances with this guy and nothing more.

He’s like Evangelion; popular with the “weird kids”, but even more so. Everything he does is grandiose and fantastical and puts a lot of people off. He also has a habit of going extremely in-depth tangents during conversations. For example, you could be talking to him about how you got ripped off from buying a fake iPhone that looked real. Instead of commenting on the situation, he states “Shouldn’t the fake iPhone be worth more since it is accurate enough to trick people while being something else entirely.” It’s not a question, he states it as a fact and you can make heads or tail of what he said or what it has to do with your swindled money and knock-off phone in-hand. Sure, what he says has merit but it’s never really called for and you’re so caught off-guard by it you don’t really know how to respond. He’s excellent person to do drugs with.

It’s peculiar that a girl this cute could exist. In all the cosmos, of all the possibilities of a person’s genetic makeup, it’s impossible for a girl to be this cute, this earnest, and this loveable all in one package. People are initially wary of her, fearing that there is deep-seated evil underneath her adorable exterior. However, it is soon apparent that while she is cute and earnest, she doesn’t have a clear goal in mind and just mindlessly exists. She’s okay with it though, which makes her more approachable. 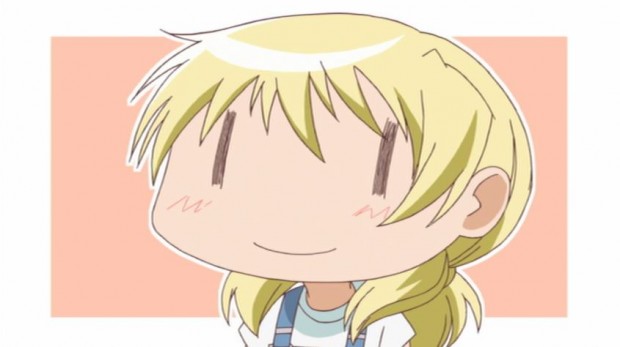 Nearly the entire list consists of SHAFT anime. Not that this article had any goal in mind but I’ll stop here before I end up recommending all of SHAFT’s works.