Look in the bushes! NO! Look up in the tree! Behind the fence! Where is larcboy04?! He is so ninja, he should be known as ninjaboy04! AHAHA!

Aloha Kawaii Girls and Kakkoii Boys! larcboy04 back with another EXCLUSIVE KawaiiKakkoiiSugoi Live Report and tonight, it is going to be on the June 1st special LE-CIEL fan club live! However, I wasn’t really in there because I am not a fan club member. BUT! I was outside of Waikiki Shell listening to all the awesomeness and managed to snatch a peek here and there of the live. The security there was pretty strict. They had a lot of staffs patrolling around the outside because they do not want outsiders (like me) to see the performances. We can only hear. The staff began re-parking their cars to cover up all visual spots. So it was a lucky break for me to catch a peek! I cannot describe everything in detail as I couldn’t see much but I will do my best to describe what I heard. Special thanks to my new friends, Colleen and Miga for translating the MCs for me! They are AWESOME! Right before the live, we saw some rainbows!

The special live started off with In the Air. Wahh!! It had such a L’20 feel to it because that’s how L’Arc~en~Ciel started their L’20 celebration. To conclude with that intro is great! However, hyde’s voice seemed off today for some reason. It could be that he is sick and still very sad about one of their dearest staff passed away two days before. *sad face*

GOOD LUCK MY WAY came out and everyone outside The Shell was rocking out! They continued dancing through Driver’s High, yelling CRASH! And FLASH! Every time those words came up. After that, it was time for hyde’s MC. Couldn’t hear what he said since he spoke too softly and we were in the area where it was hard to hear anything at the time.

Blurry Eyes came on and they started playing many oldies. Vivid Colors was a surprising one! 瞳の住人 was awesome! Now it was time a special event moment. A very famous radio host who is close with L’Arc~en~Ciel came on stage and hosted this part of the show! EDIT: His name is Yamada Hisashi! They sounded like they were having a lot of fun in there.

It seems that they had the LE-CIEL members fill out a form the day before on what L’Arc should play on the day of the special live. The band members will select randomly from the pile and play that song. The first song they selected was twinkle, twinkle, a song from their AWAKE album. Haha, L’Arc had a little trouble remembering it and it took them a long while before they actually started playing the song. tetsuya, ken, and yukihiro had an easier time to play the song since they can easily improvise. Unfortunately for hyde, he barely remembered any of the lyrics so we got mainly the instrumental version of it.

Next random selection was THE BLACK ROSE, a song from KISS album. This time, they got to listen to the original tracking first before actually attempting to play. After the first listen, yukihiro was ready! He started drumming. hyde did a better job this time since he got most of the lyrics down. Haha poor hyde!

After that, they moved on Questions and Answers. I got bits and pieces of this section thanks to Colleen and Miga. I wasn’t able to get some questions or answers. Here’s what I have written down and be warn, it could be very inaccurate. Watch out for the Natalie Live Report as well as L’Arc~en~Ciel English UK Street Team’s translation sometime soon!

Q: What else does L’Arc wanna see besides swimsuits in the audience?
A:

Q: During the USJ live, ken was dancing with cheerleaders. Did he get in any practice?
A: Practiced 20 minutes before the show.

Q: Is there a difference between hyde’s marshmellow and real marshmellow? (an on-going joke during this entire tour)
A:

Q: To yuki: Why doesn’t he speak or smile?!
A: Glad to see him doing so during this live.

There were tons of more stuff but these were what I managed to get down. Moving on to the next song, they selected EXISTENCE, another song from AWAKE. This time, no hints or practice. Again, hyde didn’t do so well and just let the audience do all the singing. Haha!

Apparently, while the host was rambling on, L’Arc left the stage! The members returned to stage and played… WOW ガラス玉! A song from Heavenly album. [made a boo boo, I had a silent letter before but thanks to @snow_pedrop for correcting me. SORRY! I was running away from security at the time] VERY COOL! Caress of Venus came on. Next up were CHASE and X X X. AND THEN WOW! 真実と幻想と from ark album! Very surprising song.

metropolis came on and ken had a very awesome guitar ending transition to… What?! C’est La Vie from Heavenly album! Brings me back when ken slapped hyde’s penguin back in the days. It was refreshing to hear all these oldies.

Link came on and did a mini-intermission for tetsuya to throw his banana and lollipop! He said it in Japanese this time. They finished up, hyde did a small MC. Then they jumped to milky way! hyde did another MC, this was his final one.

Last song was… 星空 ! That was the end of the LE-CIEL Special Live and concludes their World Tour 2012 and the celebration of their L’20 years! WOW SO FAST! The members all walked out to the middle of the stage and took a bow. tetsuya was crying a little. He came up to the mic and said “Mata ne~!” I hope the next world tour will be very soon! Even the sky was crying, the rain was heavier than usual. NO JOKE! 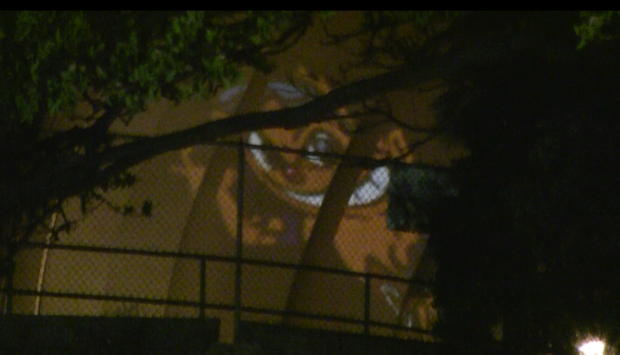 I walked to the entrance of Waikiki Shell and a lot of the LE-CIEL members were crying. Aww! *sad face* I was sad too since I came to Hawaii for the sole purpose of seeing L’Arc~en~Ciel. Now that they are done with show and done with the tour, it is so sad to see them leave again. I was also very sad because I have to say good bye to all my friends whom I have met in Hawaii and met up in Hawaii. Good byes are hard to say. I dedicated this song to L’Arc and all my new friends:

Well, this concludes my live report of the 6/1 show! Even though I was outside and running around and hiding the entire time, I had a great time! Please look forward to my 5.31 video Live Report on YouTube soon! Take care!

P.S. Special thanks to @evilashi for her notes on the live! http://evilashi.tumblr.com/post/24250918724/larc-en-ciel-world-tour-le-ciel-live-waikiki-shell