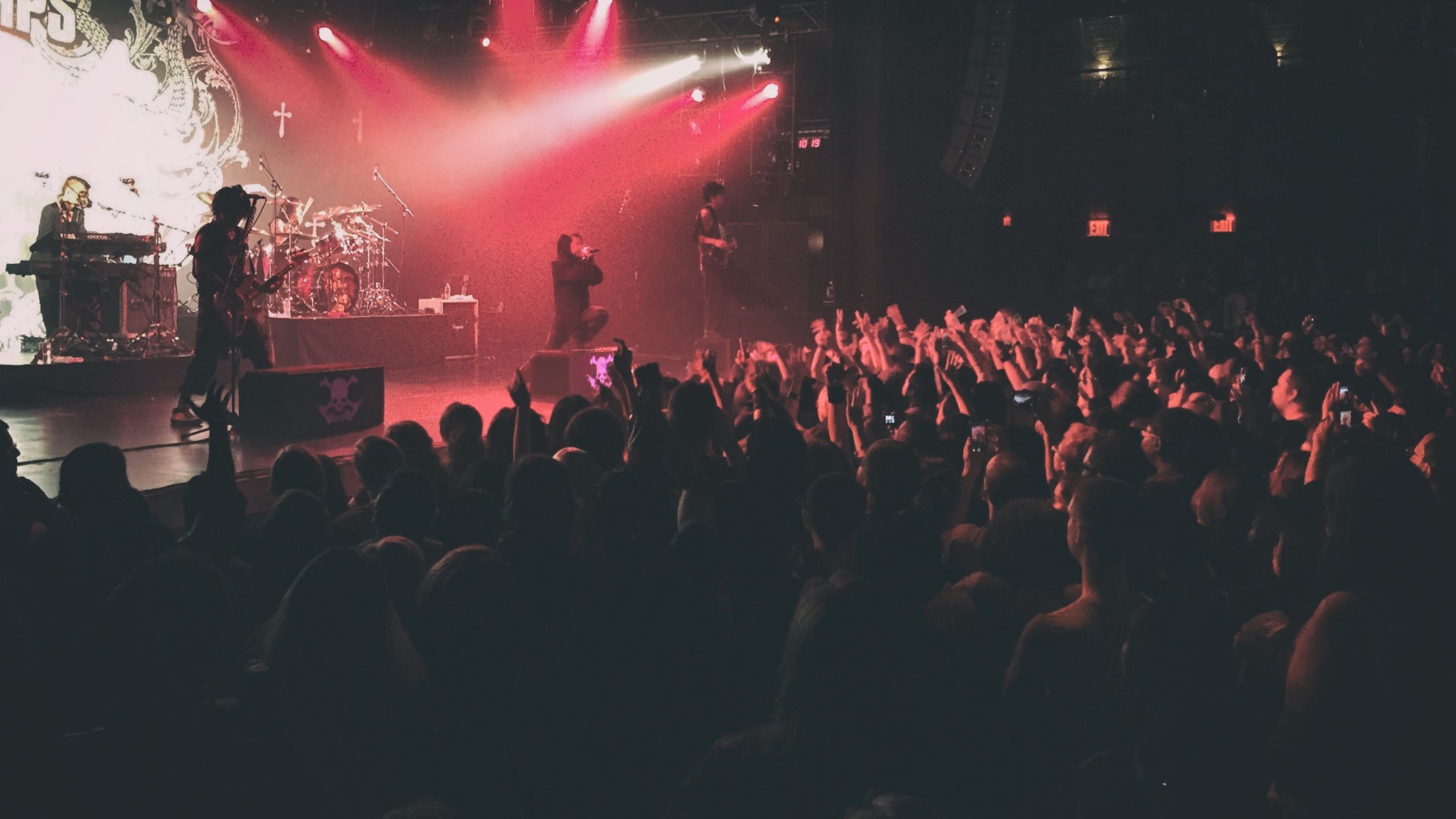 10:00 A.M.  Fans were already waiting in line ten hours before the concert. It has been almost a year and a half since VAMPS’ last headline concert in America. The fans were not only from America, but from Japan and countries like Germany as well, proving once and for all that VAMPS was a worldwide band.

The first opening act was From Ashes to New, a band from Pennsylvania. Their distinct sound combining rock and rap had a great tempo. Even fans that had never heard of them seemed to have a great time.

After From Ashes to New was Like a Storm, a three-piece band all the way from New Zealand. Their performance consisted of a mixture the Didgeridoo, an authentic Australian instrument, along with hard rock. The crowd quickly became captive by this band that performed not only original songs, but a cover of AC/DC’s “T.N.T.” as well.

Finally it was time for VAMPS.

Their stage began with the beautiful melody of a keyboard: “REINCARNATION” from their latest album. Arimatsu (drums), JIN (keyboards), and Ju-Ken (bass) took the stage. Lastly, the two VAMPS members HYDE (vocal) and K.A.Z (guitar) took their spots.

Arimatsu struck the hi-hat. Following was a familiar guitar riff fans instantly recognzed. It was “WORLD’S END,” the English version of their 8th single “AHEAD.” As HYDE shouted his first line, fans already seemed to be at maximum voltage. The members ran around the stage energetically.

Next was “LIPS.” This was the first U.S. headline show since their album “BLOODSUCKERS” was released. American fans surely must have waited eagerly to finally hear the album live. HYDE had the roman numerals “XIII” drawn onto his chest as usual. As he started to sing in center-stage, K.A.Z and Ju-Ken surrounded him. HYDE pointed the microphone towards the crowd to hear them shout “Ga-ga-ga;” he seemed satisfied as he proceeded to sing the chorus.

The 3rd song, “LIVE WIRE,” was a song the band performed numerous times while on tour with SIXX:A.M. (a band led by Nikki Sixx, bassist of Mötley Crüe). The fans showed a different kind of excitement than before, seeing how this song has changed throughout the month.

Next was “GET AWAY.” New York City seems similar to the many buildings shown in their music video. Album songs “DAMNED” and “EVIL” followed. Is it because the band spent so much time together this past month on their U.S. tour? The members seemed to be closer than ever before.

The beautiful sound of a piano surrounded the atmosphere. It was “VAMPIRE’S LOVE.” K.A.Z sat in front of the fans and played a delicate melody, and HYDE sang with a single rose in his hand. The fans who were so energetic up until the previous song quieted down to listen to this epic ballad in peace. A warm applause arose as the song ended.

The quiet crowd quickly became energetic once again with HYDE’s voice. He showed his joy holding a concert in New York once again. “We are very happy to be back!” He struck a victory pose when he saw how enthusiastic the fans were. HYDE shouted, “Come on, New York City! Here we go!” and stirred the crowd once again.

The intro of “ZERO” began. The gradually increasing bass seemed to portray the heating excitement of the fans. After “ZERO” came the lively “ANGEL TRIP.” Ju-Ken faced the crowd with a bright smile. JIN seemed to be having a great time as well. The exhilarating guitar solo made the crowd forget about how cold it is outside; inside the venue, it felt like summer already.

A powerful noise shook the ground from Arimatsu’s drum solo. He played powerfully, showing no signs of exhaustion. He arranged his part for “LOVE ADDICT” bit by bit, creating an impressive solo. Following was Ju-Ken’s bass solo. His high-speed slap bass excited the crowd even more.

VAMPS’ debut single “LOVE ADDICT” began. Surely there were fans reminiscing old times as they watched HYDE and K.A.Z face each other and play the guitar.

Once they finished performing “BLOODSUCKERS,” the intro of the next song began. Once fans recognized the song, their screams became even louder. It’s a song HYDE had been playing since his solo days: “MIDNIGHT CELEBRATION.” K.A.Z repeatedly spun his guitar around and jumped around the stage; HYDE banged his head heavily as he sang. It’s definitely a rock concert.

The members left the stage once the song ended. Barely any time passed before fans started to shout, “Bang on! Stomp everybody!” It’s an encore call distinct to VAMPS fans.

The members came back onto stage, and the encore began with “REVOLUTION II.” HYDE held the Jolly Roger flag on his back as K.A.Z stirred the crowd. In the corner, JIN was marching to the beat. Their high energy made it hard to believe that they’ve already performed over ten songs.

After that, HYDE spoke once again. He threw a few kisses to the crowd and proceeded to thank the fans. He also thanked and praised the great performances by the two opening acts, and finished off by saying, “Let’s meet again!”

The concert-classic “MEMORIES” began. The fans, even through all the energy, were a bit sentimental; some showed small smiles as they remembered all the past concerts they’ve been to. “Those are my most treasured memories” seemed to be the perfect lyrics for this moment.

The hard-rock “DEVIL SIDE” followed. Lastly, they performed a VAMPS standard “SEX BLOOD ROCK N’ ROLL.” Both the members and fans seemed to be letting all their energy out at the very end.

With this, the 90-minute concert came to an end. It must’ve felt much shorter for fans. The heat inside almost felt like a dream when stepping out into the cold. The fans didn’t seem to mind though; they all had huge smiles on their faces as they headed home.