Minecraft’s Steve and Alex Join the Battle in Super Smash... 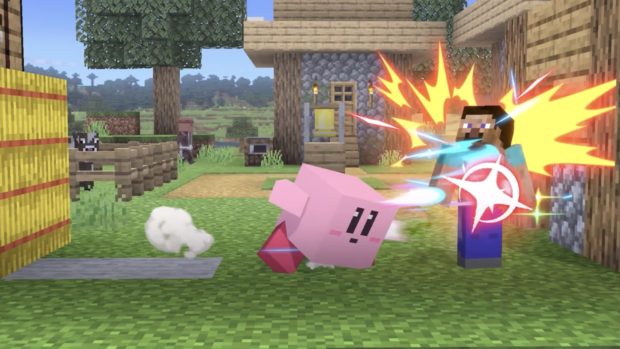 It’s mining, crafting, and building time! Minecraft’s favorite builders enter the arena in Super Smash Bros. Ultimate bringing the crossover of the year. Steve and Alex make their debut in the arena, bringing a new experience for former players and new players of the Super Smash Bros. series.

Director Masahiro Sakurai, both game developer and player, is best known as the creator of Kirby and the Super Smash Bros. series. He understood the straightforwardness of the graphics and movements needed to create the new Minecraft characters as fighters, but the real challenge was bringing the characters to life through programming work.

There are many elements present that are different from our previous fighters. The premiere of Steve and Alex’s gameplay has proven to be an impressive feat from the Super Smash Bros. team as they have recreated all the stages for our new fighters to build blocks. Biome stages are newly introduced and are precise to Minecraft’s open-world ecosystem, with the new stage giving a variety of strategies for the player to start with as it generates between different biomes each match.

The team worked to balance all the characters to accommodate this new Minecraft collaboration. Director Sakurai, a Minecraft player himself, brings the original image of Minecraft directly into Super Smash Bros. Ultimate. Our new character Steve remains rectangular in design, does not bend, walks exactly the same, and he compensates his short reach with wide range attacks. The new software update allows our Minecraft character to mine for materials and build blocks. Just like in Minecraft’s original game, Steve and Alex can craft new weapons if they were to break and upgrade their weapons with stronger materials.

The astonishing details that went into this production is apparent with weapons producing different directions of attacks. These weapons do have limited durability, but luckily tools are separate from each other so if one breaks, the other weapons on hand are still accessible. Diamond swords are craftable and will automatically upgrade all weapons as well. Minecraft characters will have accessibility to their minecart and the elytra wings giving them vehicle and flight mobility. Not only that, players can use TNT and incorporate anvils within their strategic attack combinations.

There are many particular features put into place within this new DLC package, along with updates we can all look forward to. With 7 new songs from the Minecraft’s spinoffs and mini games, these tracks are sure to enhance the genuine Minecraft atmosphere for every player. The package will include challenges where players face the familiar mob enemies from Minecraft and on top of that, Mii Fighters costumes such as Creeper, Pig, and Diamond Armor, will be available for purchase separately.

Selling over 200 million copies, Minecraft is the best selling game to date across all platforms. Super Smash Bros. Ultimate is one of many Nintendo’s million-seller titles, ranking in the top 50 games globally sold. Originally featuring characters from Nintendo’s top franchises, the series has now evolved over the decades as it spotlights playable characters from non-Nintendo franchises as well.

Another incredible feat from Director Sakurai with much support from Microsoft and Mojang. The final product will have significant differences compared to the presentation which premiered on October 3rd, 2020. Steve and Alex will be the second DLC in Fighters Pass Vol. 2 and will be available for separate purchase on October 13, 2020.