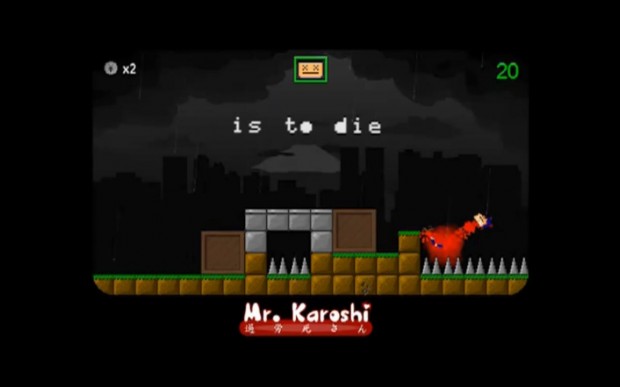 We all know the general idea of any Super Mario Brothers game: side-scrolling adventure game where you jump up into coins, boxes, pipes and save the Princess from bad guys. Of course, it has a happy ending.

If that convention is boring to you now, you just might be interested in Mr. Karoshi, a game in which the goal is for the main character to die.

As Android Police describe, Mr. Karoshi, who happens to be an “overworked Japanese salaryman” is feeling suicidal. Your job? Finish him off. The puzzle game features dark humor (no kidding?), 50 levels, a mini game, and is actually quite a bit of fun.

Check out a short clip highlighting the game’s….oddities after the break.

This is definitely a twisted little game, and the focus on an explicitly “Japanese salaryman” is more than a bit provocative, at least to me. It’s almost as if the game is intended to appeal to bored middle-class office-type workers.

So yeah, video after the jump…