Pokkén Tournament, the Pokémon fighting game we’ve been waiting for…

Pokkén Tournament, the Pokémon fighting game we’ve been waiting for…

but can’t have because it’s exclusive to Japanese arcades

It’s the fighting game that everybody wished for but never expected, Pokkén Tournament. It’s going to be a joint project with Nintendo and Bandai Namco (most likely using the Tekken fighting game engine) and is set to release exclusively…in Japanese arcades. However, do not worry, citizens of everywhere besides Japan, because since the Pokémon series is so ridiculously popular and practically prints money for Nintendo we might eventually see a home console port for the Wii U. This is all speculation, though, but honestly it would be a good idea to eventually port this to the Wii U since it needs more games coming out for it other than the new Smash Bros. and Bayonetta 2.

From the looks of it, the game seems to be a 3-D fighter with full 8-way directional movement. Considering the nature of Tekken (very few projectiles) and Pokemon (there are a lot of projectile type moves in the series) I’m not sure how it will fare on the Tekken engine, if it’s even going to BE on the Tekken engine.  As seen in the trailer, Lucario turns into his Mega Evolution. How this works in to the game mechanics has not yet been confirmed but maybe this could be a hint that Machamp might get a Mega Evolution. Heck, maybe the entire roster will just consist of Pokémon with Mega Evolutions. 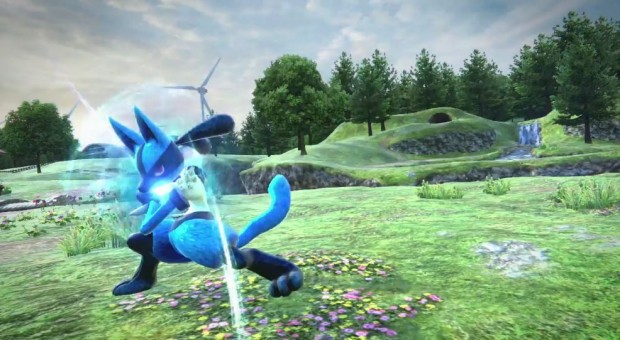 Finally, a Pokémon fighting game is coming out. Now the only thing we’re waiting for is the character roster and hopefully (the most hopeful of hopes) a home console release.