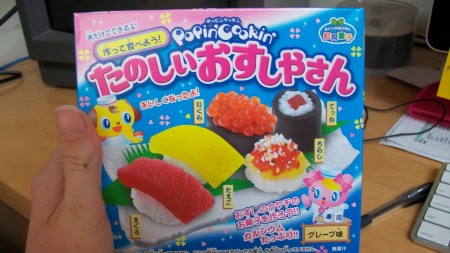 So, here we have something very interesting and fun, and, apparently, healthy for you! It’s for the artsy-craftsy person inside all of us, and if that artsy-craftsy person inside you also likes to play with your food, well you are in for a treat! This fun sushi is incredible. It’s like a kid’s science kit that you get to play with, and then eat everything! Okay, so, let’s get into it. Although the directions are all in Japanese, you can pretty much figure everything out from the pictures. 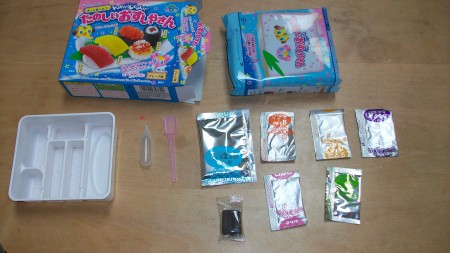 The box comes with a mixing tray, 6 pouches of different powders, an eyedropper, a mixing spoon, and guidelines for making the nori wrap. It’s all very exciting.

So, I just started from the first set of directions, which is showing me how to make the egg for the egg nigiri sushi. So we just put the egg powder into the egg section of the mixing tray (with the egg indentations on the botton, so it looks like real sushi egg!). Then, we add a little water with the eyedropper, and mix it together….and in a few minutes it forms into egg-resembling gelatin! Alright, fun stuff! 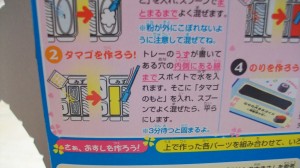 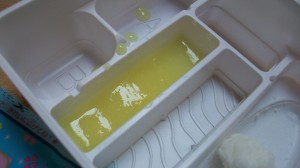 Then, we get the tuna powder, put that into the tuna section of the mixing tray (with indentations to make it look like real tuna!), add a little water with the eyedropper, and after mixing and setting, we have gelatin tuna! Awesome. 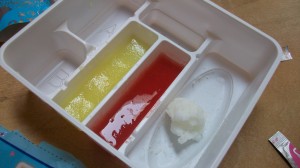 Now, we make the salmon eggs for the salmon roll. This is the BEST part by far! So, we dump two powder packets into two different sections, add water to both and mix. And that gives us a section full of a watery-blue substance, and a section full of an orange goopy substance. So, now we take the eyedropper and suck up some of the orange goopy substance. Then, we carefully drop it into the blue substance drop by drop. You will notice that the orange substance turns into little balls that look just like salmon eggs! O man, this part is so cool and fun! They even pop when you squeeze them like salmon eggs! 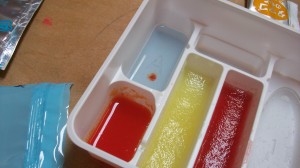 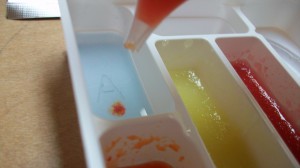 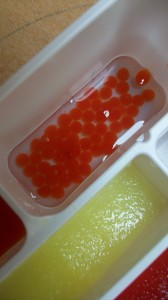 Ok, so we have the salmon eggs. Now, the rice. So, same procedure as everything else, dump the powder in the allotted section of the mixing tray and add water. This time, instead of turning into gelatin, the rice starts to get sticky and gain consistency. You keep mixing until you have a nice sticky rick pile, and it actually looks and has the same consistency as sushi rice! Pretty neat. 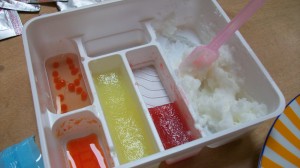 Finally, we make the seaweed (nori). So the seaweed comes in a gray block of stuff that looks and feels like gum. So you take two pieces, one big, one a little smaller, and you squish them out on the direction pad to the size that they have created for you. 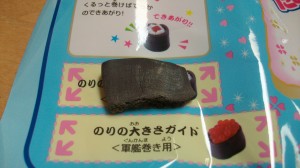 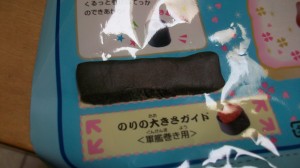 Now, we have all our ingredients and can start putting them together!

So here is the egg nigiri: 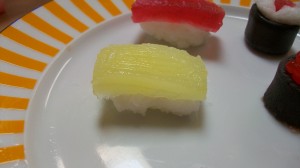 And the tuna nigiri: 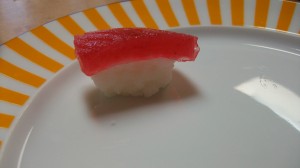 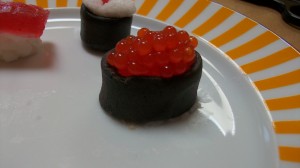 And the tuna roll: 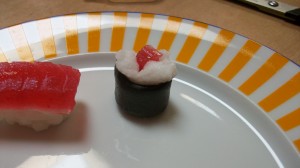 And, finally, the ‘everything’ sushi: 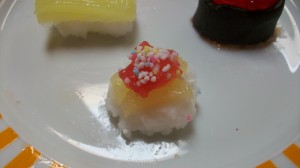 Pretty awesome, right? Yea. So, interestingly, everything has the same consistency as the sushi it resembles, but everything tastes like grape! It throws you off a bit, but for those of you that are a fan of candy, but not sushi, do not worry, because this stuff is pure sugar (and calcium, that’s why it’s healthy for you!). Popin’Cookin makes a lot of these ‘do it yourself’ candy that looks like real food, and they are actually meant to be educational candy/toys for children. While the taste (grape flavor in this case) is reallllyyyyy sweet, I’d say it’s still an enjoyable pastime for adults and children alike. Good thinking Popin’Cookin’! 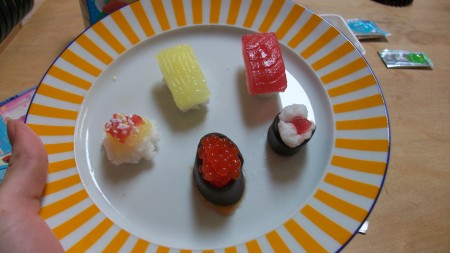