This weekend is the FIRST Los Angeles Ramen Festival in Torrance, California hosted by Weekly LALALA. That’s right. Ramen Festival. The FIRST one. One would think this has been going on for awhile and well, maybe it has, but maybe not as big this one. Quite frankly, Jordy and I did not expect such a huge turn out. Food really brings people together! 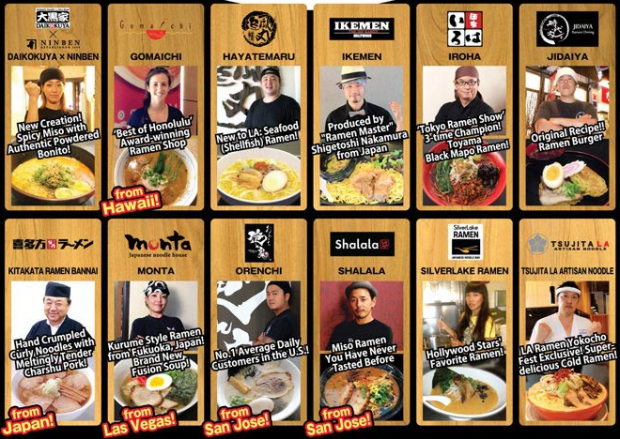 Ramen Yokocho Festival 2013 features 11 of the best ramen shops in the West Coast and one peculiar shop from Japan. It would be an understatement to say the Japanese shop is popular because Jordy and I had to stand in line for Kitakana for 3 hours. Yes. THREE HOURS. We are the epitome of crazy but we just had to join the hype of tasting authentic ramen from Japan. Hey, it beats flying 18 hours to Japan, right? Needless to say, Kitakata met and exceeded our expectations! The chashu pork was amazing, just the right amount of salty and thinness that melts in your mouth! Was it worth standing in line for 3 hours though? Yes and no but I will explain more towards the end of the article. I want to focus more on the experience first!

This is the Hand Crumpled Curly Noodles with Meltingly Tender Chashu Pork from Kitakana. Yummy-looking, right?

We have also tried one of the famous ramen burger from Jidaiya. Many of you have told me you heard rumors about this but I assure you, the mythical beast exist! Two versions in fact. But again, we’ve only managed to snag one from Jidaiya but not Ikemen. The chashu pork acted as the patty while the ramen acted as the buns. The meat is seriously in best part. They squeezed in teriyaki sauce and a bit of Japanese mayonnaise on it which were what made the burger shined! And incase your burger falls apart, no worries, they provided miso soup on the side for you to place the rest of it in and enjoy as regular ramen. Pretty awesome, right?

Although we did not really try Ikemen’s ramen burger, we’ve overheard it greatly resembles the burger of In N Out. I’m guessing they used some Thousand Island dressing and used real patty? Darn, now I wished I tried it… Guess I will have to make a trip to Hollywood for their actual shop to try it now.

Next we have gotten a spicy ramen from Iroha. The owner of that shop is actually a very famous ramen chef who is a 3 time champion on Japan’s Tokyo Ramen Show! We have the pleasure to try the award winning bowl and my god, I can’t handle spicy but I down that to the last bit of soup. My lips were burning and I had no water but it was a sense of satisfaction of experiencing champion ramen that got me through the spicy pain…

At this point, the lines were just getting too long to the point where it would be at least an hour and a half wait for each ramen booths. Jordy and I were severely short on hands to grab the rest of the ramen so we decided to wait it out and tried SHALALA’s miso ramen. It was definitely the best ramen to conclude our day. (We were there since 9:30. We did not end our day until 4:30 for only 4 bowls of ramen total) 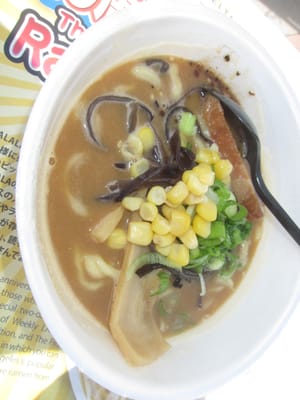 Courtesy of Luke L. from Yelp!

Now that we got the experience out of the way, let’s talk about how the festival worked. You have to line up to buy tickets and with these tickets, you will redeem it for a bowl of ramen at your choice of booth. That’s it. You just have to pay ahead of time so definitely know how much you want to eat or else you will have to line up for more tickets.

Don’t expect to receive a full-sized ramen bowl. You will have 1/4 – 1/2 of the portion you would normally get from each booth but this is a good thing. This will enable you to try out different food from each booth. However, the downside to having a ramen festival is that everyone is running around with a bowl or bowls of HOT, STEAMY SOUP. On top of having your hands burned, you can imagine the catastrophe if you bump into someone… The result with not be pretty. There were not enough table and chairs to accommodate the massive crowd so expect to be standing or sitting on the floor, again, with HOT, STEAMY, SOUP BURNING YOUR HANDS. This was held during a mildy warm summer day too so you can picture the pain.

Jordy and I did not like the organization of the booths. They were placed all over the tiny area so the lines were very disorganized and it was hard to tell if you are in the correct line for something that you want. There were a few times where we were worried lost our position for that 3 hour ramen. Thank goodness we didn’t but this wouldn’t have happened if there were a more clear path. Since this was the first ramen festival, we were okay with it but we expect the next event to be at a bigger location and more clear cut paths for lines and people safely transporting their ramen.

Overall, we are glad to have participate the first Ramen Yokocho Festival! It was such a great event to try out some of the best ramen the world has to offer and we are looking forward to more variety at the next one. That’s right Weekly LALALA, we want more! 🙂

And here’s the protip I promise to give to you. For the next Ramen Yokocho Festival, or any food festival such as this, it is best to go with more than 3 people. Have one or two people in the group line up for the most popular booth while the rest line up for the other booths. The others will pick up variety of food, bring it back to the people in the popular line, enjoy the food, and trade places. This is the best way to alleviate boredom and enjoy the food these shops have to offer at a more efficient pace! Good luck and hope to see you guys next year.