by Katherine Erlikh 11 years ago5 years ago

(Photos by Willson Lee, used with permission from Uzuhi)

Uzuhi is an underground legend of the East Coast music scene. A four person punk group, consisting of vocalist Gosha, keyboardist Tsubasa, guitarist Katsuragi, and drummer Shu, Uzuhi have taken this scene by storm. Wacky and zany, genre defying and defying easy classification, Uzuhi bear a message all should heed – “Music has no borders”. They have played everywhere, from legendary punk venues CBGB and the Knitting Factory, to mega popular hot spot Webster Hall, to the most obscure venues one could imagine; Uzuhi have done it all. Their fans are as diverse as their musical influences; anywhere from metalheads and visual kei kids to anime fans that wear cosplay in Chinatown on a Wednesday afternoon to average everyday folks, and everyone in between. Uzuhi have a universal appeal and magical music, influenced by a thousand different genres. I myself have been a fan for a year now. I was first intrigued by the fact that this was a punk band. After the first time I saw them, I was captured by the amazing energy and strength they put forth in their live shows. The music is very melodic and nbso online casino reviews easily flowing, unique; the performers are skilled, talented people who love what they do. Combined with a diverse, strong fan following, some of whom have nothing in common with each other apart from the fact that they love Uzuhi, this band is definitely set to make an impact.

The show at Sullivan Hall, the only show for Uzuhi this summer, was timed very badly. As you may have noticed, July 31st is the same day as X Japan”s Yoshiki and Sugizo”s infamous appearance at Otakon in Baltimore, Maryland. Everyone who could be there, WAS there. Which meant they simply weren”t at Sullivan Hall that night. So, it was a very empty feeling, to realise I was at an Uzuhi gig, late, and there wasn”t even the least semblance of a mosh pit. It is a bit of a disappointment, that nowdays New York”s scene can”t put together a decent pit. Nevertheless, Uzuhi gave their all to their performance as usual. For this midsummer night, Uzuhi donned traditional Japanese attire. It was very odd to see them wearing anything except matching shirts with their own logo. (The punk rock legend that if a band wears their own shirt, they suck, does not apply to Uzuhi.)

The band debuted a brand new song that night. 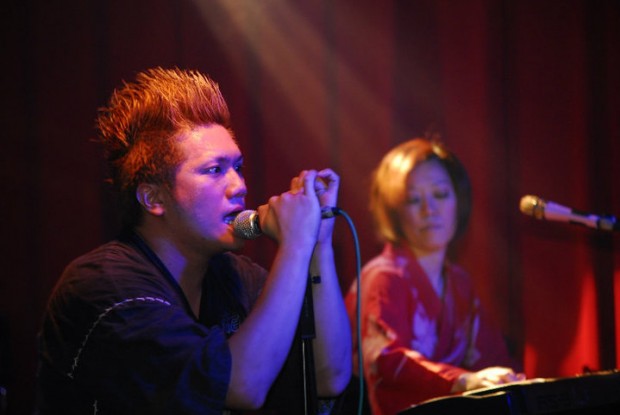 Uzuhi are currently set to do a tour in September. The dates will be as follow:

Also, Tsubasa Matsuda will have a concert at Le Poisson Rouge to celebrate her birthday on August 29th, in New York City. She will play mainly classical and jazz music.

Their music may be heard at http://www.myspace.com/uzuhi