All that glitters may be gold for the 10th anniversary of Bandai’s Saint Seiya figurine line. The company revealed a pure gold Saint Cloth Myth Sagittarius figure weighing at 4 pounds and 6.3 inches in height. How much is it worth? Good question – a whopping 60 million yen (almost $600,000). It will be on sale in the near future, but for now it will be on display at Bandai events in Japan and Hong Kong. 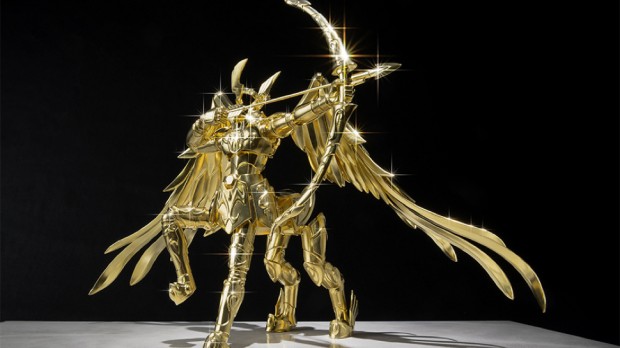 The small statue pictured is that of Sagittarius Cloth, once worn by Aiolos and Seiya. They each wore the Sagittarius Cloth and was one of the 12 guardians of the Sanctuary, where the greek goddess of war and wisdom, Athena lives.

The 12 Gold Saints are based on the signs of the Zodiac, and Sagittarius Aiolos died at the age of 14 protecting Athena from Gemini Saga, another one of the Gold Saints. Saga was jealous of Aiolos, because Pope Shion entrusted the throne to him, though Saga thought he was superior. Saga killed Shion, and disguised himself as the Pope in an attempt to kill Athena., who was then an child. Aiolos shielded the infant and ran, though later died from his injuries.

Seiya was an orphan who went to the Sanctuary to obtain the Pegasus Bronze Cloth, when his sister went missing. Saori (the reincarnation of Athena), promises to help find his sister if Seiya enters and wins in the Galaxian Wars tournament to obtain the Sagittarius Cloth. When Saori is wounded by a Silver Saint, Seiya is challenged by the 12 Gold Saints in order to get to the Pope who he believed could heal Saori. Upon learning that Saga killed the real Pope, Seiya brawls and knocks out Saga, and manages to heal Saori with Athena’s shield. Saga then commits suicide. Seiya is later killed when he sacrifices himself in order to re-seal Hades, the God of the Underworld.

If this beauty is a bit out of your price range, you could opt for a cheaper alternative on Amazon for just over $90.

Add some sparkly effects on Photoshop and Ta-daa!