by Jordy 9 years ago7 years ago 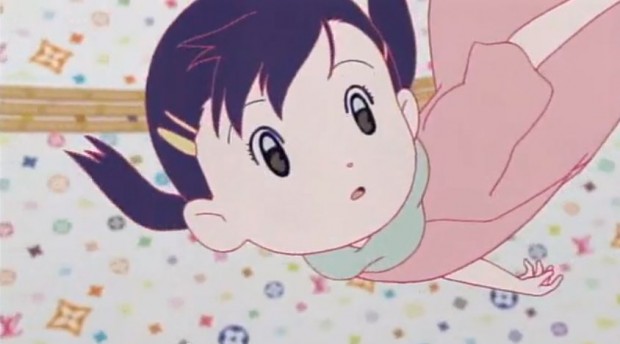 When thinking of a brand name like Louis Vuitton, one wouldn’t expect them to have a commercial with characters designed by Katsuyoshi Nakatsuru, the man who designed characters for Digimon: the Movie and Summer Wars but that is exactly what happened.

In 2003, Takashi Murakami, was put in charge of directing this short film/commercial for Louis Vuitton and Katsuyoshi Nakatsuru was tasked with character design and Fantastic Plastic Machine was put in charge of the music (the name of this particular song is “Different Colors”).

The short five-minute film/commercial was a surreal experience that was reminiscent of the first half of the Digimon movie. Parallels such as entering a strange world encapsulated in large white, round space can be drawn from both the short film and the movie. In fact, many of Nakatsuru’s works incorporate this motif (Superflat Monogram, Digimon: the Movie, Summer Wars).

There isn’t much to plot in the film as it is simply about a young girl waiting for friends outside of a Louis Vuitton store (remember , this is a commercial) when suddenly a strange-colored bear eats her phone then her and transports her to a Louis Vuitton-themed world.

While its art-style might not appeal to everyone, it’s a cute video with a strong use of pastel-shaded colors that will hopefully bring some extraordinary to your ordinary day.