Lawson, a convenience store chain in Japan, has just announced their new VOCALAWSON Campaign that also involves the beverage manufacturer, Ito En, most famous for their tea. Lawson has been collaborating with various animes, including K-On! and Evangelion, and now they will be working with Vocaloid from 9/13-9/26! 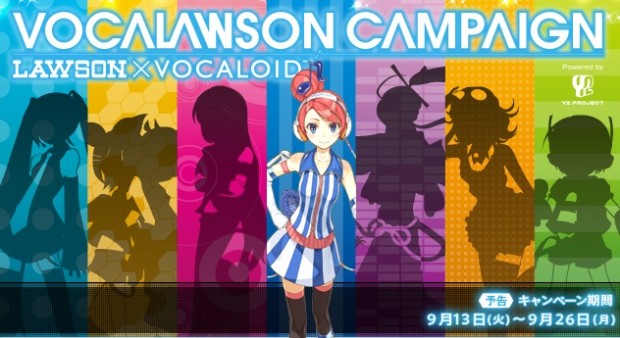 During the campaign, if you buy any of the ten eligible Ito En products at Lawson, you will receive an ID with your receipt. The ID will allow you to save points on the Lawson site for a chance to win several awesome items. Here’s what you can win: two tickets to a VOCALOID3 special event, a Yamaha guitar with the VOCALOID logo, a Yamaha BODiBEAT VOCALOID model (an MP3 player that syncs your music with your workout), and a clear file among other things. Everyone who enters the contest will win a ringtone of Akikoroid, a vocaloid version of Lawson’s mascot, Akiko. Here’s a couple of the songs: