I’ll tell you what. A massive and amazing sewer system, that’s what! If you haven’t seen these photos yet, you are in for a treat. Tokyo, as you all know, is a very densely populated city. For example, California is home to 36 million people, and there are three very large cities in California. Tokyo, on the other hand, has a population of 35 million by itself. Yea. That’s a densely packed city, yo! So, the question that everyone who hears this will probably ask is: where does the poop go? Yep, like every other city in the world, Tokyo has to deal with the poop and how to get it out of the city (and hopefully somewhere safe to decompose or get burned). So, what do you do when you have 35 million people in one city? You have a sewer system that looks like this:

Pretty cool, huh? Well, Tokyo is pretty proud of this “Underground Temple” (their words, not mine) that they have created, so much so that they give tours of it!  Technically, it’s not just a sewer but a protection ‘tank’ for the people of Tokyo. People on the inside call it the G-Cans project, and it’s there to overflow of the city’s waterways and rivers during rain and typhoon seasons. So, to prevent the poop from overflowing! Yayy. If you are as excited as I am about this, maybe you can go check out the Japan Sewage Works Association (JSWA) Sewerage Conference next year. It’s gonna be the shit. 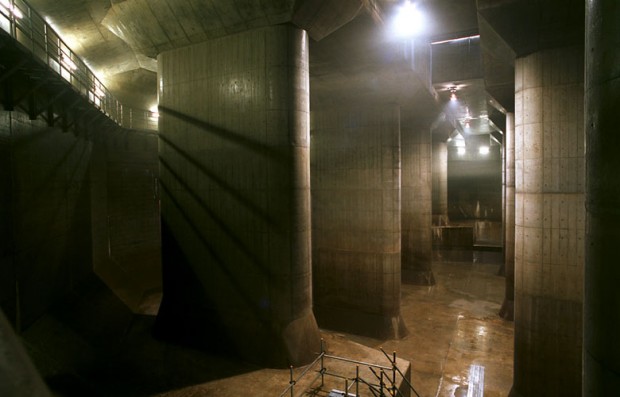