During the “BanG Dream! Girls Band Party! @HHW CiRCLE Live Broadcasting Pre-3rd Anniversary Special” live-streamed on March 1, 2020, the new band “Morfonica” was announced for the smartphone game, “BanG Dream! Girls Band Party!”.
Though only the character visuals and a portion of their video was revealed so far, Morfonica will begin activities as the 4th live action band, following Poppin’Party, Roselia, and RAISE A SUILEN.
On March 5, during the Japan airing of TV Anime “BanG Dream! 3rd Season” Episode 6, the live action MV was
broadcasted during the mid-episode commercial break. As it was an information reveal without prior notice, it immediately became a hot topic of discussion. 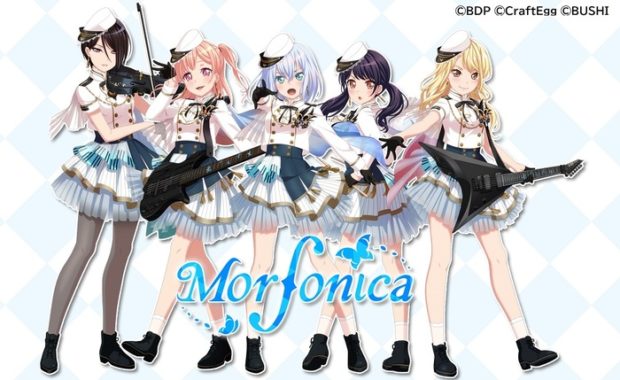 The Reveal of the 5 Cast Members in charge of Character Voicing and Live Performances!

The band Morfonica, which will make their appearance in the smartphone game, “BanG Dream! Girls Band
Party!” starting March 2020.

Its members are: Vo. Mashiro Kurata (CAST: Amane Shindou), Gt. Tōko Kirigaya (CAST: Hina Suguta), Ba.
Nanami Hiromachi (CAST: Yuuka Nishio), Dr. Tsukushi Futaba (CAST: mika), Vn. Rui Yashio (CAST: Ayasa).
Following the reveal of their characters, their activities as the 4th live band of the “BanG Dream! Project” have
now been announced, so be sure to keep a close eye on them!

On March 16, the smartphone game “BanG Dream! Girls Band Party!” (GBP) will reach its 3rd anniversary. The
vocalists’ cast members from all 5 bands in the game will make an appearance on stream, and recap the past year in GBP. All 5 members of Morfonica’s cast have also been decided to appear on stream. New announcements for both GBP and the BanG Dream! Project will be revealed then, so be sure to catch it!

“BanG Dream!” is a next generation girls band project that links animated characters with real life performances.
It is a media franchise that includes Anime, Games and Live performances. Voice actors from “PoppinʼParty” &
“Roselia” formed real bands, and are actively performing live. A third live band, “RAISE A SUILEN”, was formed
and are in the midst of activities as well. Developed together with Craft Egg Inc., the smartphone game “BanG
Dream! Girls Band Party!” has reached 3 years since its launch, and now boasts 11 million unique users in Japan.
On September 13, 2019, the movie “BanG Dream! FILM LIVE” premiered in cinemas. Starting January 23, 2020, the 3rd Season of the hit animation “BanG Dream!” is currently airing. It is also available in certain overseas territories on HIDIVE!