– It’s been already a year since you debuted, but what changed the most within a year? How was everyone’s reaction?

M: I did the voice acting and singing voice for a character, Freyja Wion. As for acting, I learned to carefully consider the character’s feelings and situation. I always wondered why she said such a line in this situation, and I learned the importance of fitting myself into the character’s shoes.

As for singing, I wasn’t sure what was special about my singing at first, but one time, Yuma Uchida, who voiced Hayate Immelmann, told me that singing conveys people’s emotions through songs. Since then, I strive to become a singer who can convey my true feelings through singing.

J: We had lots of opportunities to perform at so many places within a year. Thanks to those experiences, I started to think about how I can entertain the audience and make them smile.

M: I was always telling my family and friends that I would become a singer, so when I won the audition, everyone was so happy for me. 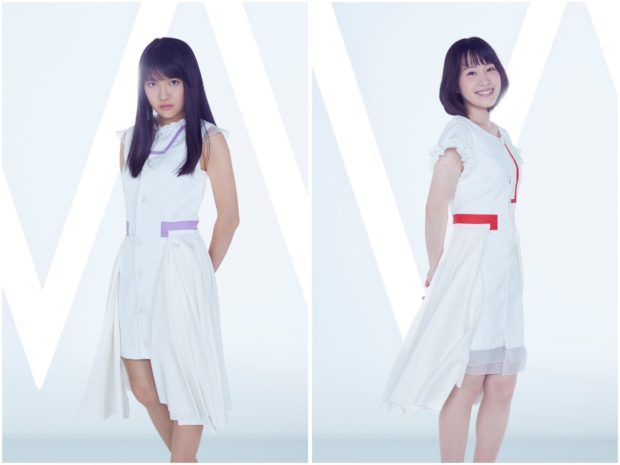 – Walküre has a catch phrase saying “Music is ○○!” What is music to you in one word?

M: Music is myself!

– Who is your type out of the male characters appeared in the previous Macross series?

– I heard that you’re originally a big “Macross Frontier” and Megumi Nakajima fan. When you had a second concert at Yokohama Arena, you performed Seikan Hikou with Megumi Nakajima as a surprise guest. How was performing and “kira”ing with your idol together? Were you nervous?

M: When I first heard about this collaboration, I sure was happy, but I was more anxious. I was anxious not because I would perform with Megumi Nakajima, but it was because I wasn’t sure if people would accept me singing Seikan Hikou which is loved by so many people for a long time. But when I stood on stage with Megumi Nakajima, I was very moved, and my anxiety finally disappeared.

I used to dance Seikan Hikou and teach the dance to my friends when I was at elementary school 10 years ago, so I was very happy that all of my effort paid off at that time. Seikan Hikou was the only song that I could dance to, so I’m glad it was a success!

– Your nickname is Minoringo (Minori + ringo which means apples in Japanese), but was it a coincidence that your character, Freyja also loves apples? Or did they add that feature after you won the audition?

M: For the final round of this Macross audition, there was a voice acting audition as well, and there was already a line which shows that Freyja loves apples. My friend gave me a nickname, Minoringo back when I was watching “Macross Frontier” 10 years ago, so when I first learned about Freyja’s favorite food, I thought it was a fate.

– Congratulations on your solo debut! The title of the albums is “Vai! Ya! Vai!”, and when I saw the lyrics of this song, it made me wonder if this title referred to the slang, “yabai (which is used when you’re surprised or impressed both in a good and bad way).” How did you come up with this title?

J: I have a habit of saying “yabai” all the time especially when I’m nervous. The producer heard me saying “yabai” and he thought it would be interesting if that were the title of the song.

J: I do like rock music. I especially love One Ok Rock. I also heard that “rock you” means “shake your soul,” so I named it “junnarockyou” hoping I will be able to rock someone’s soul someday.

– Is this your first time coming to America? Is there anything that you would like to go or do during your stay?

M: Yes, it’s our first time. I want to eat hamburgers. Everyone else already had burgers while I was taking a nap earlier.

J: I already made that dream come true. Only if I had more time, I wanted to go to Disneyland.

– Lastly, what is your kawaii, kakkoii, and sugoi thing?!

M: It might be very personal, but I’m addicted to a Japanese idol group, Keyakizaka46, lately. They are very cute, but when they perform, it’s super cool. I simply think they are amazing!

J: One Ok Rock! Their MC is very cute, but during the show, they look very cool! I want to become like them in the future.

From the TV anime MACROSS DELTA comes the most powerful tactical music unit in the Milky Way, Walküre. Since the TV anime premiered in April 2016, the group has released 2 digital singles, 2 singles and 3 albums. Their first album Walküre Attack! was awarded “Animation Album of the Year”. Walküre performed their second set of solo concerts on January 28 and 29, 2017, at Yokohama Arena, gathering 22,000 fans in 2 days. On May 31, 2017, they will release the concert Blu-ray Walküre ga Tomaranai. JUNNA is the singing voice of Mikumo Guynemer. Minori Suzuki performs both the voice acting and singing of Freyja Wion.