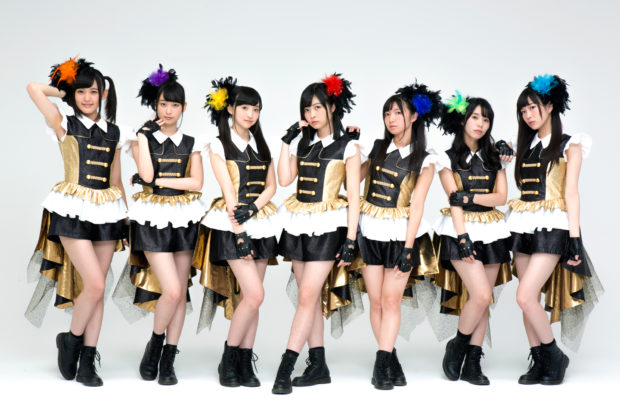 – Everyone shares the same name, nick name, birthday and even blood type with Wake Up, Girls! characters, and you guys are very in sync. Please tell us if there’s anything that is different from the character.

Mayu: Maybe our place of birth?! Mayu secretly admired idols, and she has strong wills. I prefer something cool over cute things.

Yoshino: The more the story goes, the more similar the character and myself get, but the only difference that I can think of is the length of our hair. When I debuted, I had short hair, but since the character has a long hair, I tried my best to grow it. But then, she chopped off her hair in the recent movie! We never have a matching hair…

– Are you planning to cut your hair some time?

Kaya: I thought it was hard to find something in common between me and the character. Especially her personality. For example, Kaya Kikuma is very confident and strong-minded, but I’m not like that.

Miyu: Maybe the volume of the hair! When I put my hair in two pigtails, I don’t’ have that anime-like fluffy hair! When we did a stage play, I added hair extensions over my pigtails.

Minami: Minami Takayama is a big eater, but I don’t eat that much! I love sweets, but not heavy food like a big bowl of ramen.

Airi: Same as Yoppi (Yoshino’s nickname) but my hairstyle was always different from Airi Hayashida from the beginning. Also my character is not great at dancing, but I’ve been dancing for a long time, so people expect that I cannot dance well like the character, but I can, and that might sometimes surprise them.

Nanami: I think I can relate myself to Nanami Hisami a lot, but the most obvious difference is that I cannot play the piano.

– One of the best feature about Wake Up, Girls! is that the actual voice actors are growing together with the anime characters. I heard that when you first won the audition, you guys had a camp for lessons. How was spending a long time together with the members for the first time? Did it produce the sense of unity as a group?

Yoshino: We were sent to a camp right after we passed the audition. We had a lesson from 8am to 9pm every day. We woke up at 7am every day

Minami: We had to go for a jogging at 8am every morning.

Yoshino: Even after the late lesson, we gathered for meetings to discuss how we can improve more.

– How long was the camp?

Yoshino: The shortest one was 7 days, and the longest one was 10 days.

– How many times did you go to camp?

– Wake Up, Girls! has been singing other anime themed songs for “Scorching Ping Pong Girls” and “Love Tyrant” lately. Do you wish to sing more anime songs in the future?

Mayu: We will be actually singing an opening song with May’n as Wake Up, May’n! for a new summer anime, “Restaurant to Another World.” At first, it felt strange when we sang for “Scorching Ping Pong Girls,” but now we’re grateful that more people would get to know about us in this way.

– As Miyu mentioned earlier, you guys also challenged yourselves with the stage play, “Wake Up, Girls! Aoba No Kioku.” How did it feel to play your characters using your whole body? Was it everyone’s first time to act in a stage play?

Mayu: I was the only person who had an acting experience before.

Miyu: I felt like I was learning every day. We asked Mayushi (Mayu’s nickname) for advice before the lesson all the time. We started off wondering how we can memorize the lines.

– Do you wish to do more stage play in the future?

Yoshino: It was a lot of fun. I felt like I’m not similar to Yoshino. Like I felt bad for her because I’m not a pretty model like her, but I could act with lots of confidence. So if I had another chance, I would love to try again!

Mayu: I want to bring our stage play to Sendai some day!

– Which career do you think would fit you the most, voice actor, singer or actress?

Mayu: I love singing and dancing, and sharing the moments with the audience. So I want to do more live performance in general!

Yoshino: I always wanted to become a voice actor, and I finally made my dream come true. So I want to improve as a voice actor more.

Kaya: Same as Yoppi, I want to do more voice acting.

Miyu: I love everything, so I want to try everything!

Minami: I love doing a job by using my voice, so I want to do more voice acting, radio shows, and so on!

Airi: I had a great time acting as a stage play actress, so I want to do more jobs which I can deliver messages with my own words.

Nanami: I want to improve my dancing more!

– What was the happiest and hardest moments since you joined Wake Up, Girls!?

Nanami: The happy moment is that I get to visit many cities and countries! This is such a great life experience. I actually went to Sendai for the first time after I joined this group, so I’m happy that I got to know many great parts of Sendai. The hardest part is… maybe stamina. I’m not a fast runner, and I have the least stamina in this group.

Kaya: When I applied for Wake Up, Girls! audition, I was a senior in college. If I failed, I was planning to start job hunting. So my happiest moment is that I passed the audition and became a voice actor. The hardest moment is… I’m the youngest child in my family, and I’m short. So even my friends used to treat me like a kid. But after I joined WUG, suddenly I became the oldest member, and I didn’t know what to do.

Yoshino: The happy side is that everyone celebrates my birthday every year. Right after this group was formed, we went to Chicago, and everyone celebrated my birthday splendidly. It was filled with surprises! When I opened the door of my hotel room, there’s a note saying “open the closet,” and I thought it was from a robber! Now I think about it, there’s no way that it was a robber because the note was written in Japanese. When I opened the closet, there’s a necklace and another note saying “check out behind the TV,” so I was wondering whose necklace it was… After the fourth note, I finally realized that it was members’ writings. The last note says “go to the manager’s room,” and when I went, everyone was there celebrating my birthday! So there were seven presents and notes from each member, it was very cute. A present from Kaya was American sunglasses with “Happy Birthday” writing on it!

The hardest part is the roundtrip to go to work from my hometown, Kumamoto. I had to fix my Kumamoto accents and dialects, too.

– As you mentioned earlier, you guys just announced about a special collaboration unit with May’n, Wake Up, May’n! What did you think when you first heard about this news?

Miyu: I was so happy and I couldn’t believe that I get to sing with May’n as a unit! We’ve been a fans of May’n since before we debuted, so I was like “I need to go brag about this news to my friends!”

Nanami: With this collaboration, I’m very happy that I get to sing as a new unit!

– We also received news that Wake Up, Girls! New Chapter anime is coming up this year! Like the famous line from the anime, “What is the future of Wake Up, Girls!?”, please tell me about your future work or projects!

Mayu: Our summer tour is about to start, and we are thrilled to announce more details about the New Chapter little by little during this tour. The New Chapter is a sequel, but it will be a new chapter so that people who have never watched “Wake Up, Girls!” before can enjoy it as well. We are planning to perform a new song during the tour, too, so I hope both the members and our fans can get pumped for the New Chapter!

– Finally you will be performing in Los Angeles for the first time tomorrow! Are you excited?

Nanami: It is our first time to come to Los Angeles, so I’m very excited and nervous to see our American fans’ reactions! In addition to WUG, there will be other amazing artists, so I’m a bit worried if we will be alright… I mean I’m sure it will be fine, so we will just try our best!

– Lastly, what is your kawaii, kakkoii, and sugoi thing?!

Nanami: Burgers! I ate one today, and it was cute, cool and amazing!

Airi: Fruit-infused water server at the hotel! I’ve never seen such a thing in Japan before, so I thought “L.A. is amazing!”

Minami: Hmm…. All I can think of is 2D characters…. Cú Chulainn from Fate! He’s cute, cool, amazing, and strong! So moe!

Miyu: Palm trees in Los Angeles! I don’t see these types of palm trees in Japan, and I think they are so cute!

Kaya: Vaccination scar. I like vacation scars a lot, and I think they are very cute! It looks like as if we are baptized! Although we get shot at elementary school, the scar remains even when you grow up, and I think it’s very bold.

Yoshino: I think it’s Wake Up, Girls! There are cute songs while members can be cute or cool, too!

Mayu: The first thing that I thought about when I heard “cute, cool and amazing” was the anisong artist, LiSA. I admire her so much, and I wish I could become like her. I’ve never seen anyone else who can balance the cuteness and coolness so well.

From the avex x 81produce Wake Up, Girls！ Audition’s second anisong vocal audition, the seven finalists formed the voice actress unit “Wake Up, Girls！” The girls are also the voice actresses for the anime Wake Up, Girls！ where the setting of the anime is based in Sendai. In January 2014, the TV series and movie were released. Their support activities for the Higashi-Nihon earthquake were highly appreciated and the group was awarded the 9th “Seiyu Award” special award in 2015. They have toured every summer for 3 years. In 2017, a new anime series will premiere.