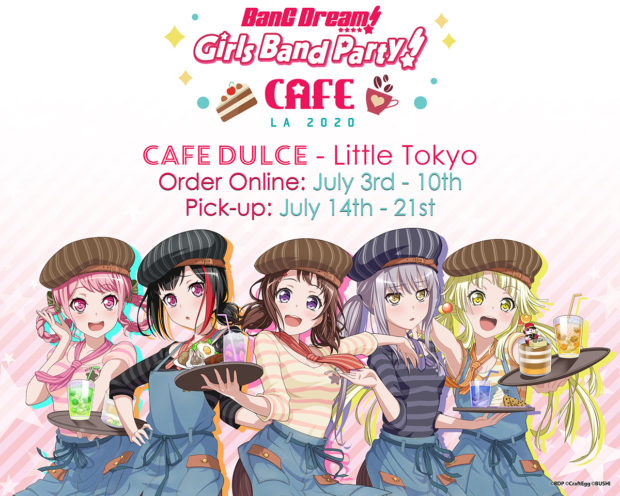 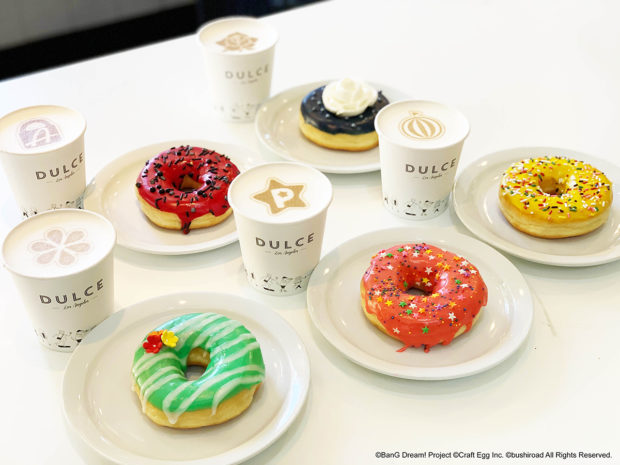 The Online Cafe was a 45-minute talk event joined by special guests, Aimi, the voice of Kasumi Toyama, and Ayasa Ito, the voice of Arisa Ichigaya, from Poppin’Party (BanG Dream!). Over 230 fans from North America was in attendance.

Fans were welcoming the guests in many creative ways through their web cameras, such as waving light sticks and decorating the room with the BanG Dream! related items. The guests were extremely happy by the fan’s enthusiastic welcome. 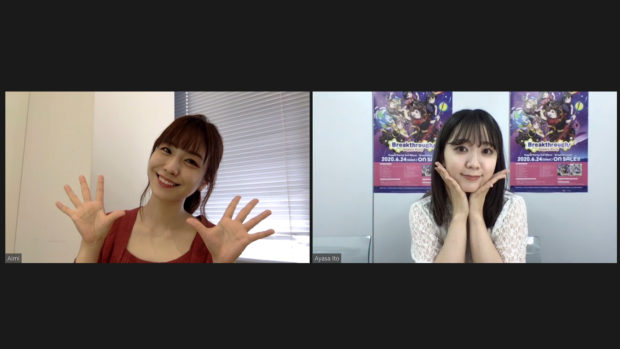 There was an interactive pop quiz session, where the guests were answering questions with the chance to win donuts from Cafe Dulce. Fans were able to help and interact with the guests by using virtual backgrounds that were specially provided before the event. 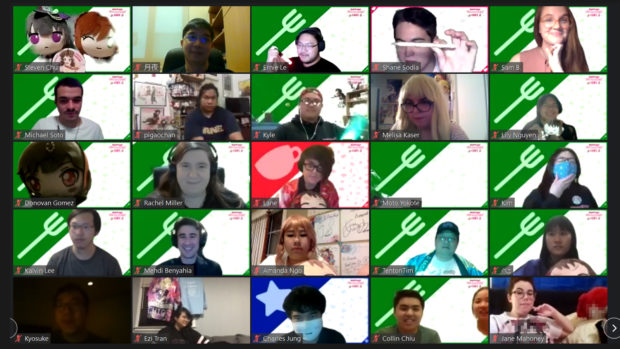 After the quiz, we moved on to the Q&A session! Fans requested their questions for Aimi and Ayasa in advance, and some of the chosen ones were asked to the guests during the event.

Q1) I love what you do in Poppin’Party. What is your favorite song to play live as a band?

A (Aimi): “Kizuna Music♪”! I feel the bond of the band when performing this song. It reminds me of how the story was in the anime, and it brings me to tears.
I (Ayasa Ito): “Tear Drops” is my favorite! It’s such a cool song, and I love that I can see the cool side of each member on the stage from the back.

Q2) What did you do to entertain yourself at home during the quarantine time?

A: I watched a lot of YouTube. I studied from watching many concert videos. Both Ayasa and I became YouTubers recently, too!
I: I love whipped cream, so I bought many different brands of the cream and researched what would be the best way to eat it.

Q3) What are your favorite memories of each other?

A: There have been many times when we stayed at each other’s house. There’s a time when Ayasa came to my house, we had a pajama party! It’s my favorite memory.
I: We spend a lot of time together, but among those memories, when I dyed my hair, I felt like it didn’t go well. But Aimi told me that my hair looks good, and that made me so happy.

Q4) What do you like the most about your character?

Lastly, fans asked Aimi and Ayasa to sing the Poppin’Party chant and they all did the chant together to wrap up the event!

Message to their American Fans:

A: Thank you, everyone! I had a great time. I hope I can see you in person in Los Angeles again. One day I would like to visit Los Angeles to perform and visit Café Dulce!
I: Thank you for the fun time! It was an online talk show, but I was really happy to see everyone’s faces one by one. The collaboration donuts looked really delicious. I hope I can visit LA to try them as soon as possible!

After the online event, we had the honor to join the press interview with Aimi and Ayasa Ito.

■Interview After the Event

First, Aimi and Ayasa told us about their feeling after the event.

Aimi: This was my first time doing the virtual event, but I had lots of fun just like any other talk shows that I’ve ever joined before. Everyone was so welcoming and warm!
Ayasa Ito: It was my first time doing a virtual event as well, but it was interesting to see what their house or room is like. I loved seeing how much they genuinely support us.

Then, they talked about what they thought about the collaboration menu.

A: Donuts looked so different from Japanese donuts, and they looked so fancy. I feel like I will buy them if I see them at the café.
I: Donuts looked very colorful! It made me want to try all of them. Now I’m curious to see what kind of other collaboration menus would be possible all over the world!

Similar to the Q&A session with the fans during the event, the press submitted their questions in advance, and some of them were asked to Aimi and Ayasa.

Q1) Your latest album, “Breakthrough!”, just released. What is your favorite song on the album? Do you have any special memories from working on it?

A: My favorite is “Mirai Train”! I love the lyrics! When recording, I tried my best to show Kasumi’s growth and emotions as a character through this song.
I: Mine is “Hello! Wink!”. I’m sure It’ll be a super fun song to perform at concerts. It’s a popular song among the fans, too.

Do you have any special memories?

A: This album describes the evolution of the characters in addition to each member’s growth in their skills as a performer.
I: We filmed a MV for “Breakthrough!” overseas, and it was our first time filming a MV just for five of us. We went during New Year’s, and it was my first time traveling overseas on New Year’s as well. That was a good memory of “Breakthrough!. “

Q2) This is the first “BanG Dream! Girls Band Party! Cafe” event held in the U.S. As BanG Dream! has really risen in popularity across the world, and we’ve even seen collaborations, like the song “Baby Shark”, come exclusively to the global version of the mobile game. What are your thoughts on the increasingly global nature of the franchise? Are there any new ways you’d like to see BanG Dream! brought overseas?

A: I love how this series is becoming globalized! I love traveling overseas, so that makes me very happy. I recently appeared on a music program, so I hope I can be on a music program overseas some day.
I: I saw some fans were cosplaying or holding on the plushies of the characters that we play to show their love and support for this franchise on the screen during the event. It made me very happy to directly see the support from our overseas fans like this. And I want to cover American pop songs.

Q3) At CharaExpo USA 2019, Aimi and Sae Otsuka came up with a fun name for their pair of characters in Poppin’Party. What title would you give Kasumi and Arisa as a duo?

A: Yes, Sae and Aimi are “Sexy 2”, but we tried to come up with a different name at the event. What was it…?
I: For Aimi and I, we usually just connect two names for “Aimi Ayasa-Chan”…
A: Love Beauty Flower…? What is Ayasa in English? (Aimi is trying to translate their name’s kanji into English.)
I: I think Ayasa is Colorful Sand?
A: Kansai dialect? How about “Happy Dialect” because we both speak Kansai dialect?

Q4) You two have been working together on anime/music projects for a while now. What are some changes and improvements in abilities you’ve noticed in each other over the years?

A: I’ve known Ayasa since she was much younger, but now she became such a caring and wonderful lady.
I: Aimi became better at expressing her emotions through her singing.
A: Arisa is so Tokimeki Experience! (like the Poppin’Party song)

A: I would like to play the drums! I’m a guitar vocal on the front, but I want to support the band from the back. I think my personality matches more with that role.
I: I also would like to try drums! I play the keyboard, but each key is physically small, so the movement that I have over the keys is not as big as playing the drums. It looks very nice to use your body and play the drums freely.

Q6) Are there any projects you’re working on or have coming up that you can tell us about that you’re looking forward to?

A: We are rehearsing and practicing towards the concerts right now. I hope we can go through with that performance and the event itself.
I: I’m looking forward to the next original Poppin’Party song for “BanG Dream! Girls Band Party!” app!

Q7) You previously have been guests at Bushiroad’s Grand Festival and CharaExpo events here in the US. What was the experience like being able to meet the fans here in the US?

A: Everyone was very kind. Even when I joke around in English, fans always react very well to it, and it’s sweet of them to do so.
I: I noticed that American fans are extremely passionate. At concerts, they even sing along with us and their singing is almost as loud as Aimi! I felt like we united into one.

Q8) If you were to be invited to another convention or Bushiroad event in the US in the future, what city have you been interested in visiting?

A: I would like to visit New York! As a fan of American comics, I have an image that my favorite character is in this city. So I want to visit these landmarks that I see in the movie.
I: I want to go to Broadway! I love musicals, so I would like to see the actual performance on Broadway once in my lifetime.

Q9) Aimi has been to the US multiple times so far. Ayasa, did you receive any gifts from her? If so, what was it?

I: Aimi gives us gifts every time she goes to the US. Last time it was super cute socks for all Poppin’Party members, but it turned out that it was men’s socks. She also has got us a mini perfume.
A: I bought these socks and perfume from the shopping mall in Hollywood.

Q10) Aimi, we last saw you in America at December’s Chara Expo event (2019). You, along with the rest of Popipa, were also present at the 2018 event. What have you noticed in terms of the evolution of American fans?

A: I think there were a lot more fans there in 2019. I saw more cosplayers and fans with goods as well.

Q11) The BanG Dream! event focuses heavily around desserts and sweets. Do you two have any favorite desserts or sweets?

I: I really enjoy sweets especially pancakes! Even when we went overseas for “Breakthrough!” MV, I had pancakes there!
A: My favorite sweets is French toast because It’s easy to make on my own so easily! Sometimes I just make French toast out of 3 of the toasts.

Aimi and Ayasa Ito kept showing their gratitude toward the overwhelming support and love from their American fans. We hope to see Poppin’Party’s concert here in Los Angeles very soon!

“BanG Dream!” is a next generation girls band project that links animated characters with real life performances. It is a media franchise that includes Anime, Games and Live performances. Voice actors from “Poppin’Party” & “Roselia” formed real bands and are actively performing live. A third live band, “RAISE A SUILEN”, was formed and are in the midst of activities as well. The 4th live band “Morfonica” began their activities in March 2020.

Developed together with Craft Egg Inc., the smartphone game “BanG Dream! Girls Band Party!” launched in Japan on March 2017, followed by a global launch in April 2018 and has generated over 15 million downloads worldwide.

Production of the new movie series as well as the movie “BanG Dream! FILM LIVE 2nd Stage” has been confirmed.