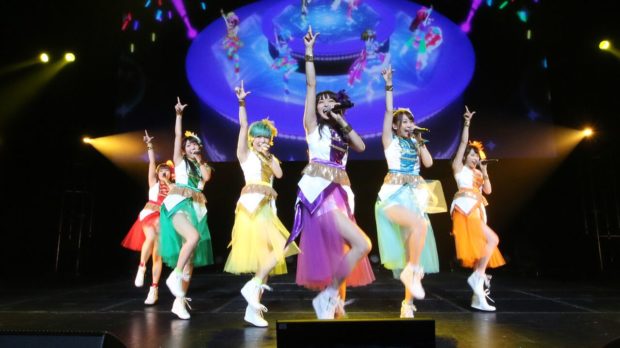 – Welcome to Los Angeles! Can you tell us what you’re looking forward to the most here in America?

Saki: Of course, we are looking forward to performing here in US, but we are also excited to go shopping and eat!

Himika: Everything is so photogenic here!

– Did you take lots of photos?

Himika: Not yet. haha

Yuki: I’ve been taking photos only from a moving car, so all of them turned out pretty blurry.

– How about food? Is there any food that you would like to try here? 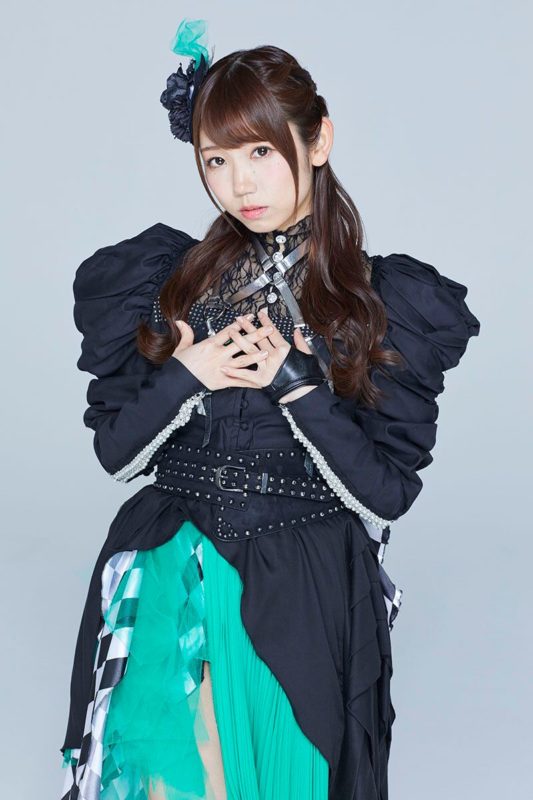 – I heard that when you first won the audition, you guys had a camp for lessons. How was spending a long time together with the members for the first time? How did it produce the sense of unity as a group?

Yuki: Not at all. I was too busy focusing on myself. haha

Azuki: We had to go jogging during the camp although we barely had experience.

– How long was the camp? 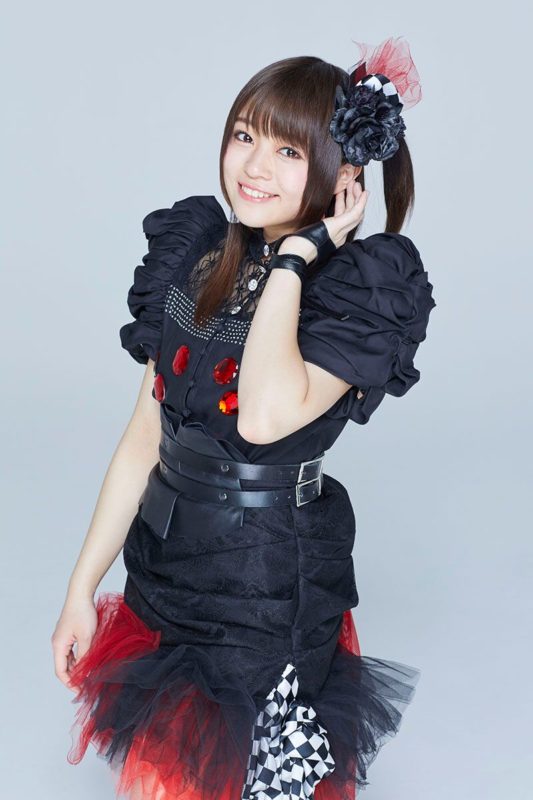 – i☆Ris is well known for playing PriPara’s main characters as a whole unit. After you voiced PriPara characters, what changed the most for you and i☆Ris? 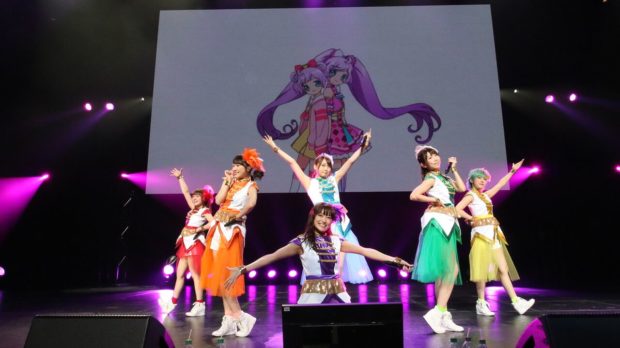 Yu: As a group, many more people learned about us. As for myself… I personally began to love acting! I always wanted to become a voice actress, but I never thought about becoming an actress. But the more I act, the deeper my love for acting grew.

Miyu: Even for myself, more people got to know me through PriPara. i☆Ris started as a hybrid unit that is active both as idol and voice actress, but our work was mainly focused on idol activities after our debut. So I’m grateful that PriPara gave us an opportunity to improve as a voice actress.

Azuki: Because of our PriPara days, I could see different aspects of my members, and I respect them even more now. 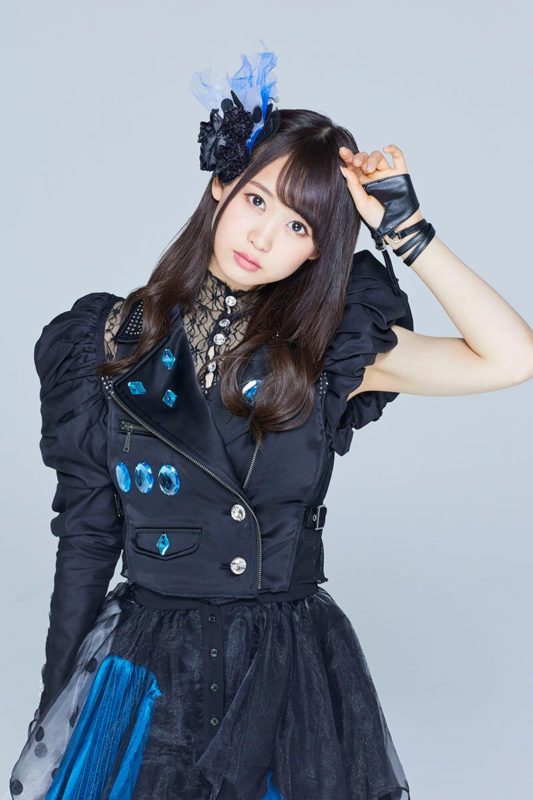 – Great work on “i☆Ris 4th Live Tour 2018~WONDERFUL PALETTE～”! It seems that you have performed lots of previous PriPara songs including “Memorial”, and I’m sure PriPara fans loved it very much! How was the tour and what did you guys put into the most?

Himika: We released our 3rd album, “WONDERFUL PALETTE” last fall, and this was a tour to celebrate our 3rd album. We have a tour annually, so we want to challenge something new every time. Each member has a solo song in this album, so we struggled to show our own colors individually.

Yuki: Of course this tour was for our 3rd album, but at the same time we wanted to make sure our new fans would enjoy our concert as well. So we came up with our set list which can be enjoyed by both of our old fans and new fans! 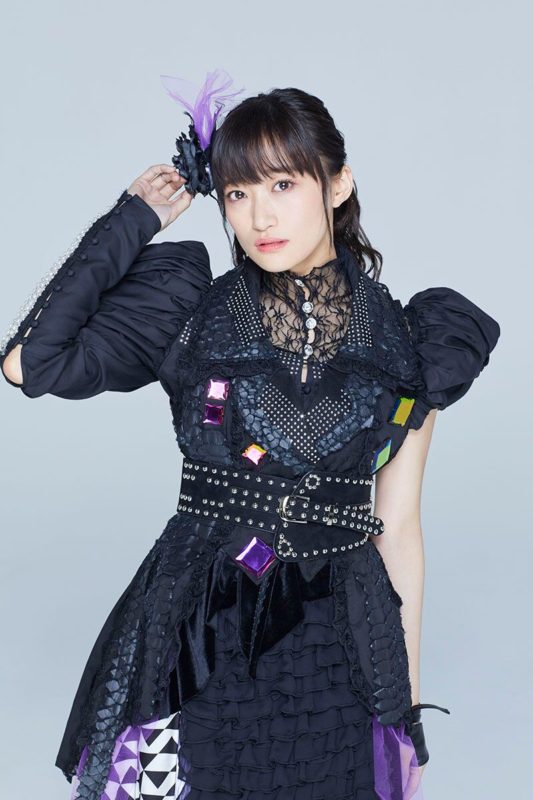 – “Changing Point” is a theme song for an anime series, Magical Girl Site. Which magical girl was your favorite when you were little?

Saki: I have a generation gap between the members, and I didn’t grow up watching magical girls, but I do love Sailor Moon!

Azuki: I think mine is Himitsu no Akko-chan! This series was not aired on TV when I was little, but I had a Tekumaku Mayakon compact toy, too! This is the series loved by many people in the world even today. 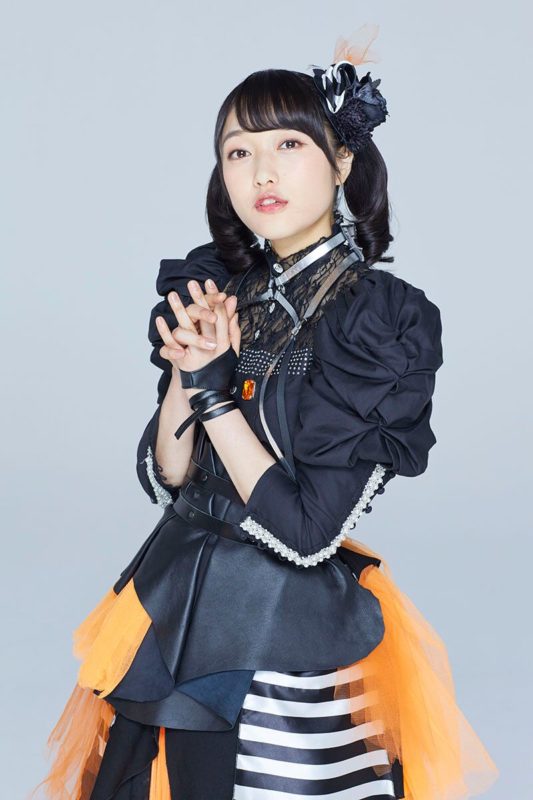 – Like “Re:Call”, “Changing Point” is a very cool song which might be different from your previous songs. What kind of music would you like to challenge as i☆Ris in the future?

Yuki: Something jazzy! I’m sure American people would love it, too!

Saki: I want a song that we can sing with the audience at concerts!

Himika: I want a self-introduction song!

Everyone: Now?! Isn’t that too late?!

Azuki: When we release our next album, I want each song to have a different genre of music! I’m sure it will be very challenging! I think one of the best things about i☆Ris is each member can sing and perform in any style, so we want to keep singing despite of the music genre!

Yu: I still want a denpa song…! Denpa songs are so cute…

Yuki: We have a denpa-ish song, but not really.

– Which song was that? 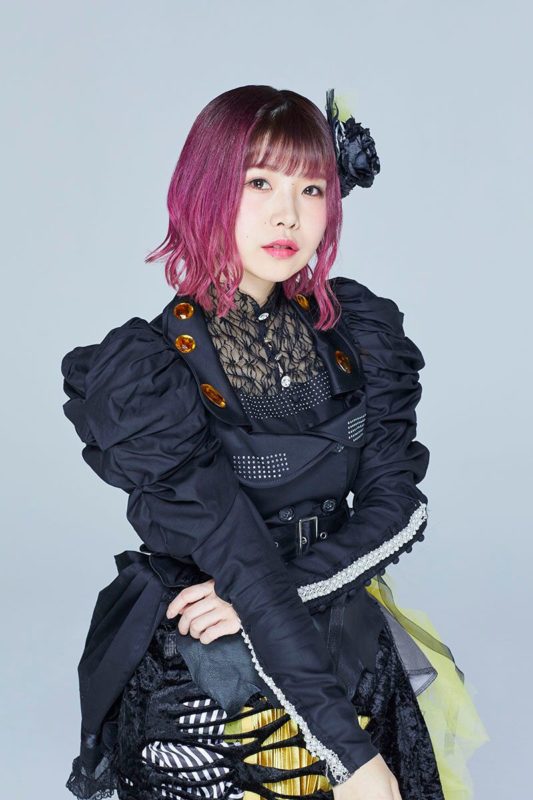 – Azuki has been designing some of i☆Ris costumes lately. Azuki, what do you care about the most when designing?

Azuki: Hmm… I try not to design the costumes that I want to wear. First of all, I love Harajuku fashion and have a different taste in this group. So I try to design costumes that the members would love wearing while showing off the body parts that they’re comfortable with and vice versa. Of course I try to match with the concept of the song and tour, too. Well, to be honest, I don’t really spend lots of time on designing. It’s more about an intuitive sense. Once I get some idea, I discuss with a designer and this is how the magic happens.

– For the others, how do you like the costumes designed by her?

Yuki: Azuki considers about each member’s height when…

Azuki: Probably there’s only one member who cares about height…

Yuki: Yes, I meant body type. Haha She emphasizes the body parts that we want to show off, so I’m really happy with her design.

Himika: I love that Azuki always asks for our request, and she makes it happen. She knows exactly how we want!

Azuki: We even take bath together, so I can’t help but noticing each member’s superiority and inferiority about their own bodies.

Miyu: Azuki considers about dancing when it comes to designing. She knows what kind of fabrics is good for dance, sweat and flexibility. This is something that only a performer can notice, and I’m grateful that she is designing some of our costumes now! 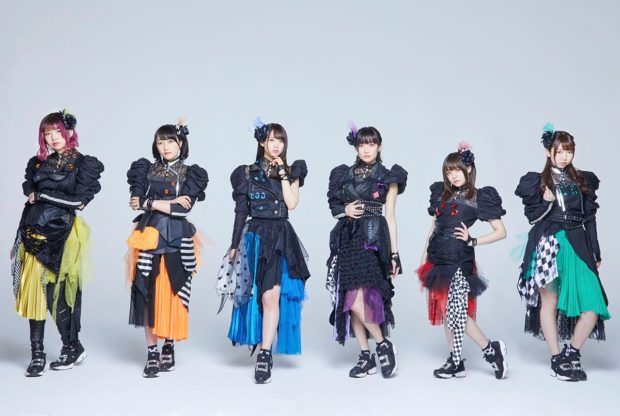 – For your new i☆Ris fans, please tell us one song that you want to recommend to them!

Saki: “Dream Parade”! You can watch our music video online, and I personally think everyone looks super cute in this video.

Yu: “§Rainbow”! It’s an old song, but this is my ultimate favorite!

Himika: I think the reason why so many people in the world got to know about us is through PriPara, so I would say PriPara’s first opening, “Make It!” This song is loved by many people, and some people even cover this dance! I want everyone to listen to this song!

Yuki: I always recommend “Fantasia Wonderland” to those who have never heard of us! I believe everyone despite of their nationality can enjoy our cute and fantasy world through this song.

Azuki: “Tetsuwan Girl” is a song, which is a little different from other i☆Ris songs. It’s such an energetic song that is perfect for outdoor music festivals. Even if you don’t know i☆Ris, this would be the perfect gateway for our music! 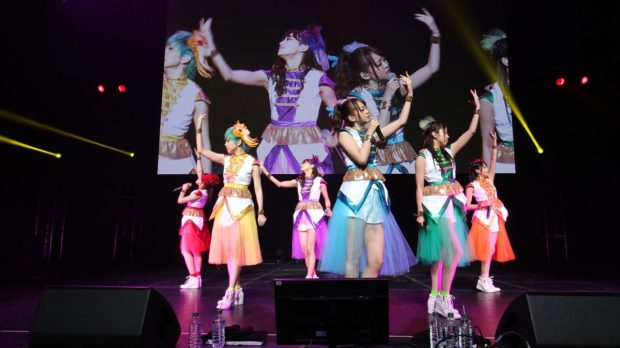 – Lastly, what is kawaii, kakkoii, and sugoi to you?

Saki: I want i☆Ris to be kawaii, kakkoii and sugoi!

Azuki: That’s true! Some members are cute while others are cool, and when we gather, we are amazing.

Himika: We have different types of songs and personalities, so we want to show our own individual colors more!

Yuki: I want to add omoshiroi (funny), too!

Azuki: We will be KKSO (kawaii, kakkoii, sugoi and omoshiroi)! 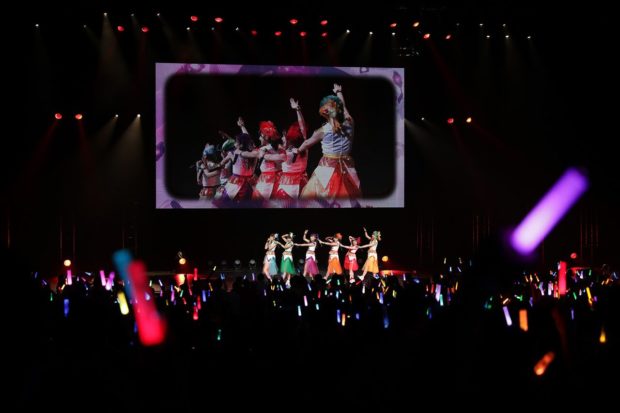 Thank you all for coming to the Anison World Matsuri♬
It was so very exciting to do our first live concert in LA, and thank you so much for the wonderful surprise! ✨👀✨We really hope to come back and see you guys all again at our next live concert! ⭐️#ax #ax2018 #AnimeExpo pic.twitter.com/XT9pj8pkZ9

i☆Ris is a hybrid unit that was through the joint audition held by Avex Group and 81 Produce. In addition to performing as singing pop idols, they also work as anime voice actors.

In July 2012, the six-member group was formed as a result of the 1st Anisong Vocal Audition. On November 7th that year, they released their debut single “Color”, which was the ending theme song for the anime series Battle Spirits: Sword Eyes. In July 2014, in addition to member Himika Akaneya’s voicing the main character, the members provided voices for the main cast of the anime series PriPara. In April 2015, the group released their first album We are i☆Ris and went on their first five-city tour of Japan, and their last show of the tour at Zepp Tokyo was sold out. Meanwhile, their 9th single “Dream Parade” and 11th single “Goin’ on” charted at 8th place on the Oricon Weekly Charts. Their 12th single “Ready Smile!!” ranked 9th on the Oricon Weekly Charts, making it their third straight single to chart on Oricon. In 2016, they won the Best Musical Performance at the 10th Seiyuu Awards. In November 2016, they performed for the first time at Nippon Budokan in front of a sellout crowd. In March 2017, their 14th single “Shining Star” debuted in 10th place on the Oricon Weekly Chart, and in April of the same year, they held the i☆Ris 3rd Live Tour2017 ～Fan+6=∞～, their 9-city, 17-show tour. In November 2017, they released their third album Wonderful Palette and held the i☆Ris 5th Anniversary Live to celebrate their fifth anniversary as a group. In February 2018, they released their 15th single “Memorial” which was used as the opening theme song for the 4th season of the anime series Idol Time PriPara. The group also announced their 4th nationwide tour i☆Ris 4th Live Tour 2018 ~WONDERFUL PALETTE~ for spring of 2018. In April 2018, their 16th single “Changing point” was confirmed as the opening theme song for the anime series Magical Girl Site, their first late-night anime tie-up. i☆Ris’s activities continue to expand as they head into their 6th year as a group.