Anticipation filled the room as everyone waited for the Cutie Honey Universe panel to start. 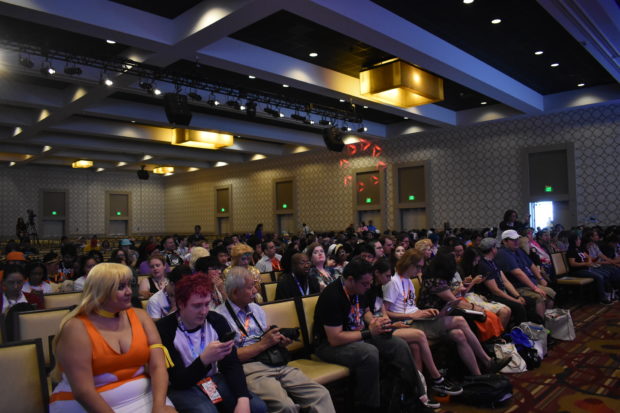 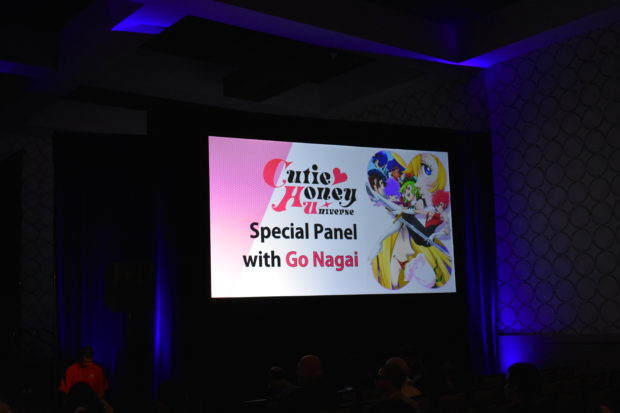 Not only does the audience get to watch an episode from said series on the big screen, but also the opportunity to meet the one and only Go Nagai, whom Naoko Tsukeda (wearing red in picture below), a representative of Pony Canyon, a branch responsible for the world sales of Cutie Honey, has met and described as a “very nice man.” “Nagai-sensei is honored everywhere and is invited to film and anime festivals,” Tsukeda said.

Apart from the screening, the panel also commemorated Nagai’s 50th Anniversary of when he started his career as a manga writer and artist.

Unfortunately, photography and filming were not allowed during the episode screening, but what was shown was the second episode about Honey’s origin story and her motivation to join PCIS (Panther Claw Criminal Investigative Services) to fight the evil Panther Claw organization to avenge her father’s death. I enjoyed the episode; it was hilarious and action heavy! Cutie Honey Universe is readily available on Crunchyroll, and it is worth watching if you have a Crunchyroll account.

Once the episode finished, Go Nagai-sensei came out to the stage and greeted his audience! The crowd was overjoyed that they were in the same room with Nagai-sensei. Appearing with Nagai-sensei was the producer of Cutie Honey Universe,  Ichinao Nagai, and two cosplayers dressed in Honey’s most recognizable attire. 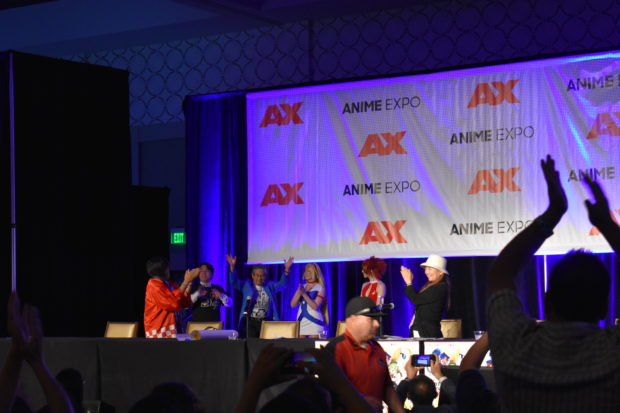 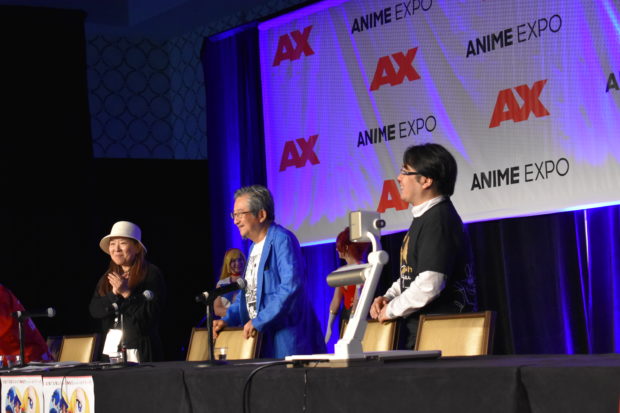 As a bonus, Nagai-sensei did a live drawing. While he drew, Tsukeda allowed for a limited Q&A. A girl came up and expressed her love for Honey. She said that she has been waiting for twenty-two years to be in the same room with Nagai-sensei and thanks him for creating Honey, because the character helped her to understand who she was as a person, to believe in herself, to not be afraid of anything, and to be a strong woman. Her words visibly touched Nagai-sensei. When one asked why did he become a mangaka, Nagai-sensei recalled that when he was four years old, he read the works by Osamu Tezuka and copied Tezuka’s style, solidifying his decision to become a mangaka.

Eventually, he completed his drawings, and they were impressive! He drew Honey and Akira Fudo as Devilman! Check them out! 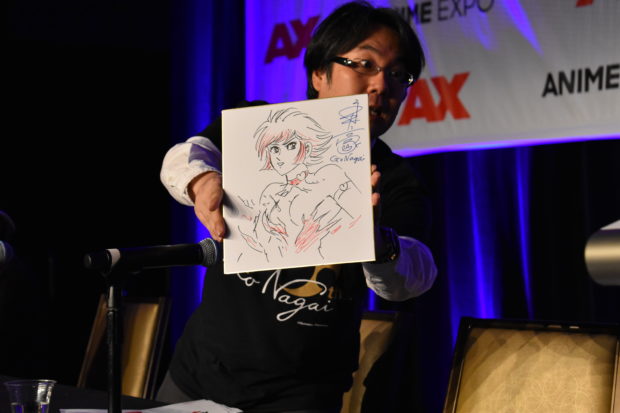 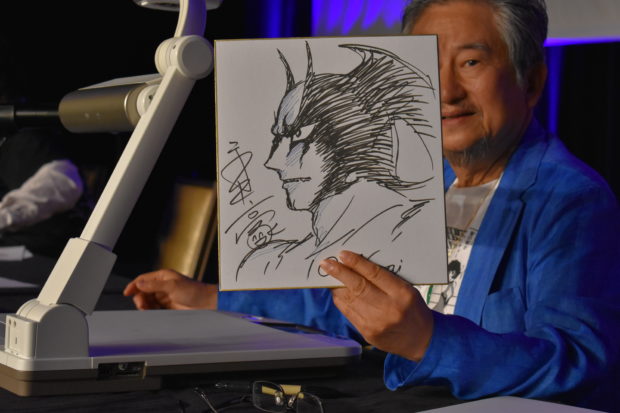 A question addressed to producer Ichinao Nagai in regards to Nagai-sensei’s 50th Anniversary was what projects are to be expected in the future. He said that apart from the releases of Devilman Crybaby and Cutie Honey Universe, there will be an upcoming series named Mazinger Z Infinity, the news receiving an enthusiastic cheer. 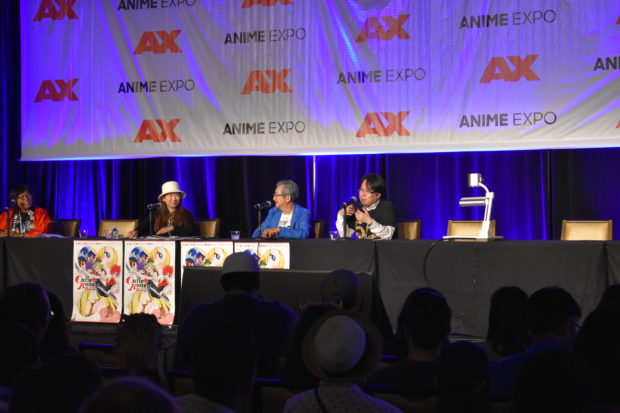 Tsukeda asked Nagai-sensei what his overall thoughts were about Anime Expo. Nagai-sensei recounted how he went to San Diego Comic Con with Osamu Tezuka several decades ago, and while at that time there were many Japanese anime fans, he is overwhelmed by the amount of anime fans he sees. Nagai-sensei said, “I am so grateful and happy that so many people in the US are fans of Japanese anime. I am totally humbled.”

To conclude the panel, Nagai-sensei played a game of rock-paper-scissors with the audience, the lucky last two standing receiving a Cutie Honey Universe posters. 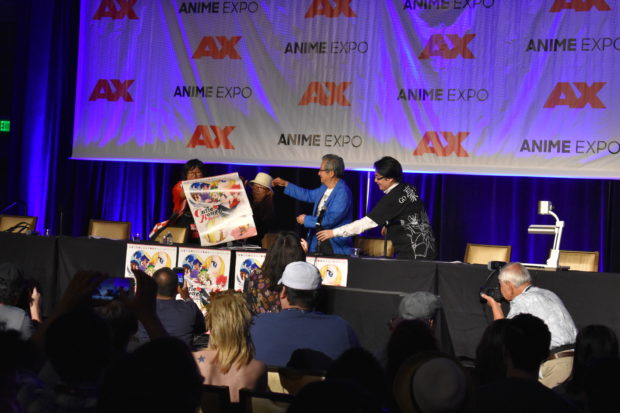 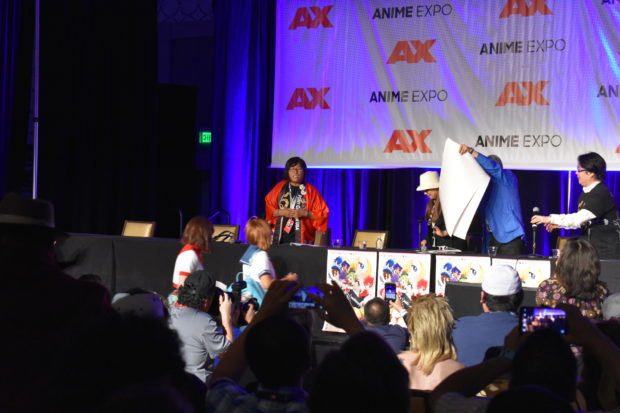 It was an honor to have the opportunity to see one of the most influential manga artists and writers of all time! I also had the pleasure to photograph the two cosplayers who were with Nagai-sensei. An unforgettable experience it was! 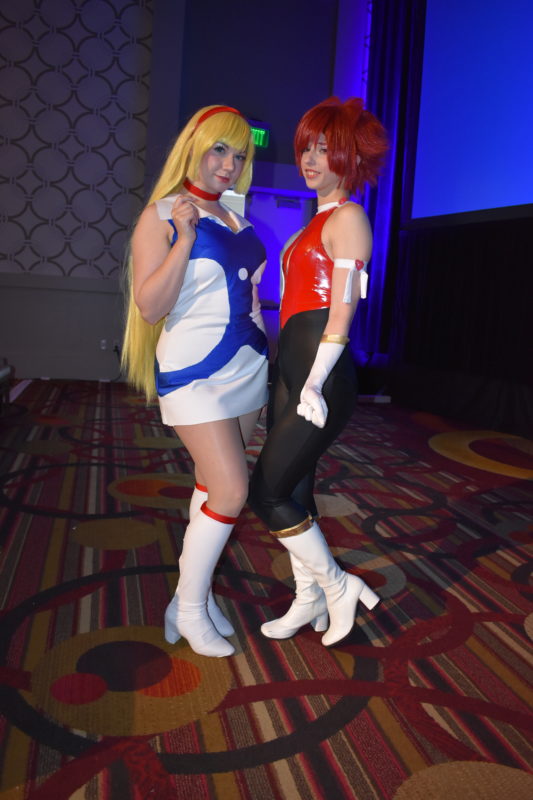