Recettear: An Item Shop’s Tale Still Integrates the Kawaii to... 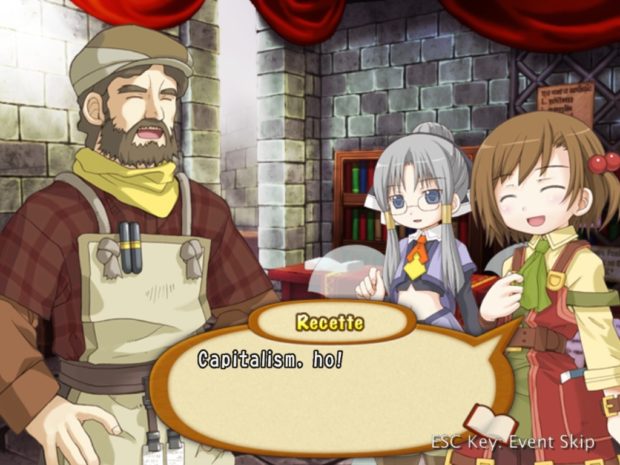 If you are looking for a unique and hidden indie classic, there is a perfect game worth revisiting. It has been thirteen years since the release of Recettear: An Item Shop’s Tale and it is still a game unlike any other. No game has been able to replicate this bubbly, short, and sweet title involving playable roles of being a shopkeeper and an adventurer to this day. In this game we play as Recette, a young girl left behind with debt from her father and accompanied by a fairy loan-shark named Tear to her pay off his debts. She learns to run an item shop by herself which involves finding items in the marketplace and learning how to haggle for higher prices to townsfolk in this business simulation game.

After her struggles of only selling items from the marketplace, she meets adventurers she interacts with as her customers who aid her through dungeons to collect rare, secret items for her to sell in her store. This introduces the dungeon crawler aspect without the need for turn-based attacks and uses a real time combat system similar to .hack Infection. The gameplay creates a fantasy world with the unique role of an RPG as well as a dungeon crawler. Dungeon gameplay involves move sets based on the adventurer assisting Recette. The game also allows your character to equip items picked up after the defeat of monsters. Unlike many dungeon crawlers which involve doors and load times to new areas, Recettear provides open maps to explore, introducing an element with pathways to new areas and portals to upper floors. There are a variety of boss fights at the end of each dungeon which will drop a rare and expensive item when defeated. With each boss ranging in different attack patterns, Recettear provides diverse combative gameplay.

Recently, a new game titled Moonlighter released a similar gameplay of shopkeeping and dungeon crawling with a more pixel based design of graphics. With this new release, the nostalgic game of Recettear deserves a mention for fans of Moonlighter. It is definitely recommended that Moonlighter fans give Recettear a try and experience the hand drawn 2D art and open map dungeon experience.

NPCs in the game have character development throughout the game and do not generate the same repetitive responses. Recette builds relationships with each NPC, learning their general tastes and habits for haggling and purchasing styles along with preferences for certain products.

As the game progresses your item shop expands and upgrades, allowing you to sell more items. You develop skills to craft and create rare items unavailable in dungeons. The game involves business simulation opportunities similar to World of Warcraft which involved giving players a chance to participate in crafting and selling similar to the marketplace.

This is a unique journey for players to experience a behind the scenes gameplay in the life of a shopkeeper in a fantasy world surrounded by knights, assassins, and priests while still being involved in a combative system. Recettear: An Item Shop’s Tale is a hidden gem that indie fans will definitely appreciate. It is not only shopkeeping at its finest, but also at its funnest.

This classic indie gem can be found on Steam for download. As Recette would say, “Capitalism ho!”