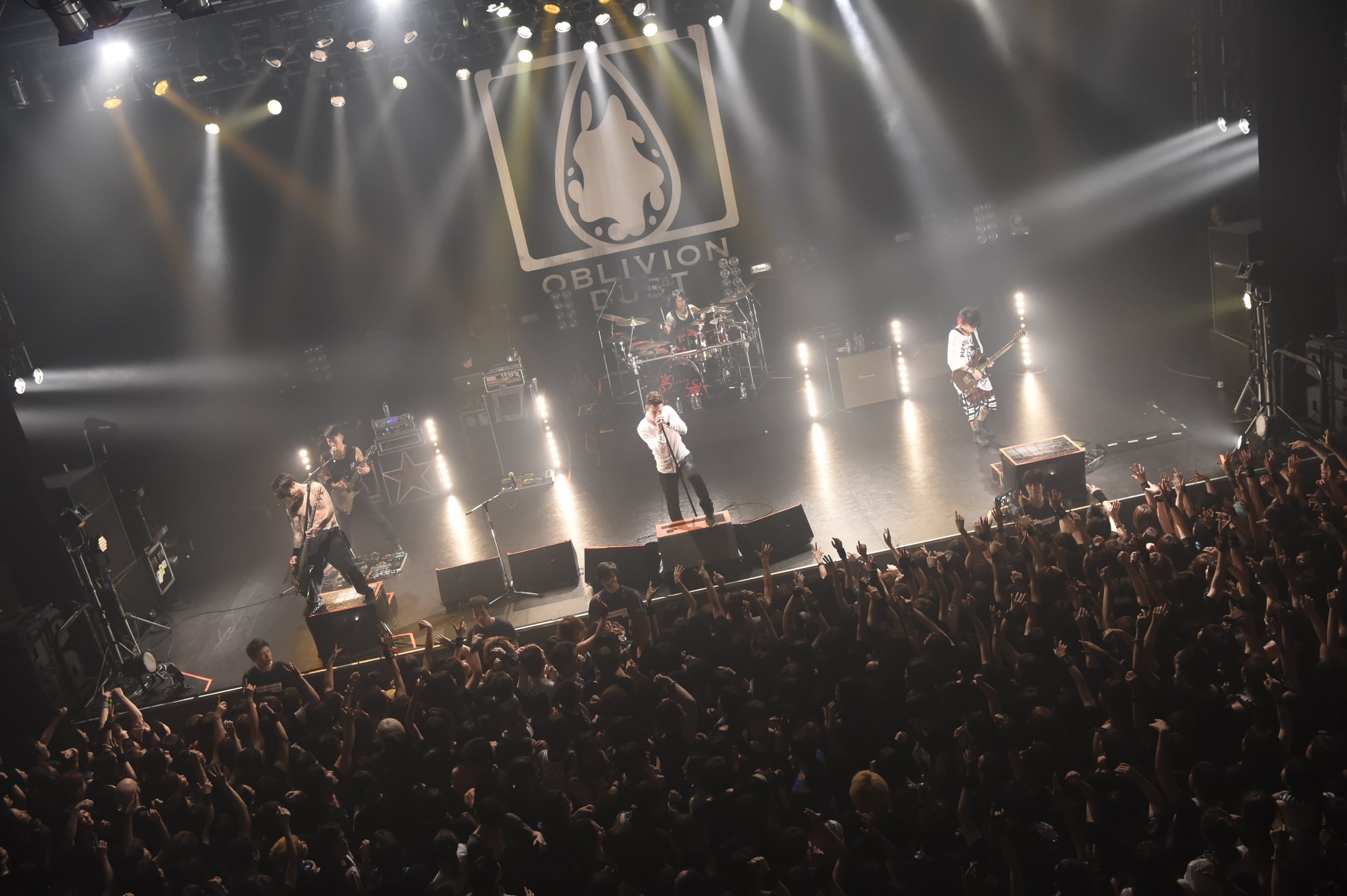 OBLIVION DUST held their final performance of “Dirty Heat Tour 2016” on August 11 at Tokyo TSUTAYA O-EAST. This tour followed the release of their newest album DIRT. 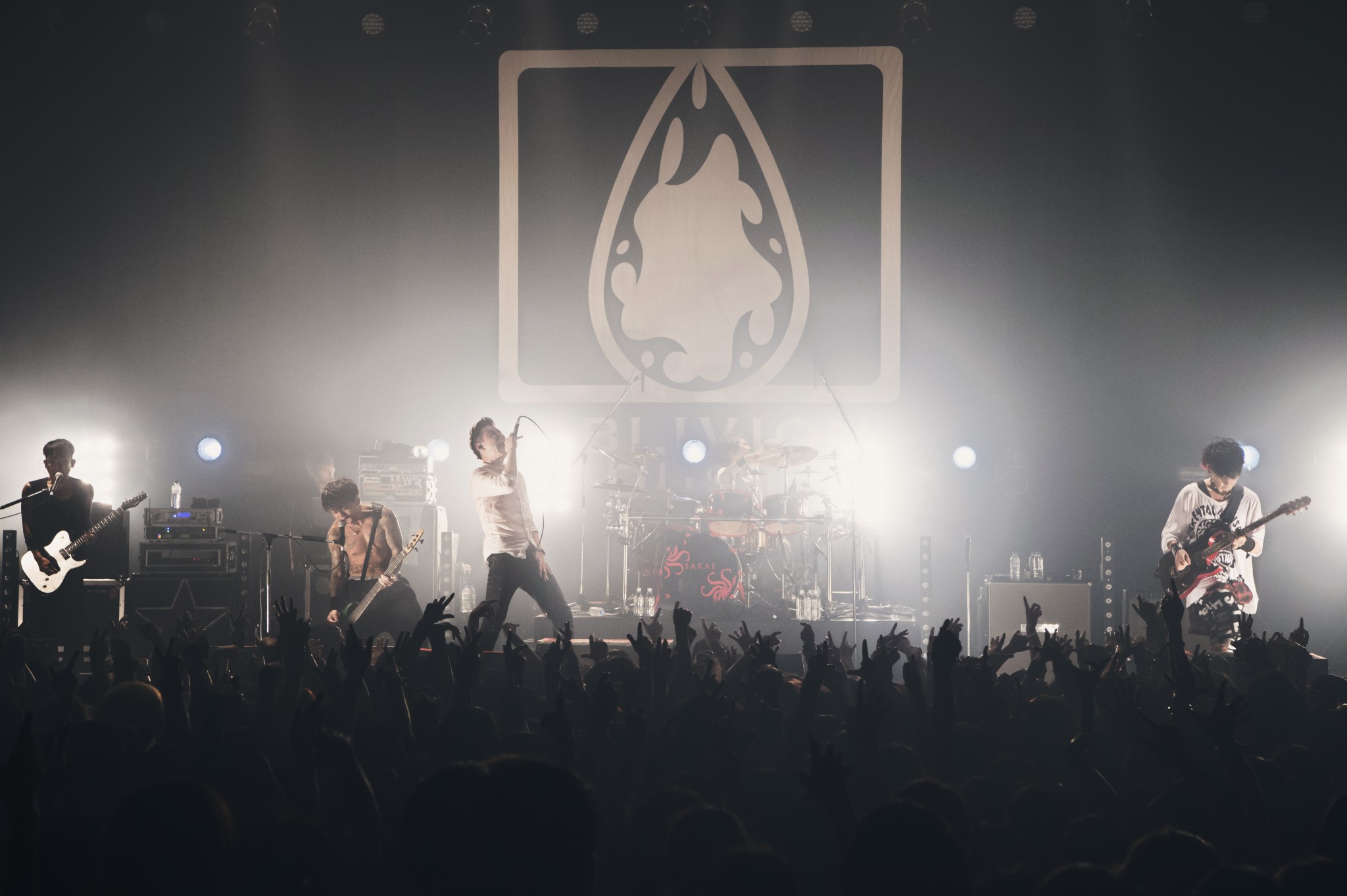 7 P.M. ARIMATSU (Drums), K.A.Z (Guitar), RIKIJI (Bass), yuji (Gutiar), and KEN LLOYD (Vocals) took the stage. The first number was “In Motion,” a song from their recent album that expresses the band’s signature sound. The rock sound of the guitar was emphasized even more than in the CD audio. Mosh pits and divers quickly emerged. What makes OBLIVION DUST so great is the fact that both the band members and audience enjoy the concert with full force from the beginning. 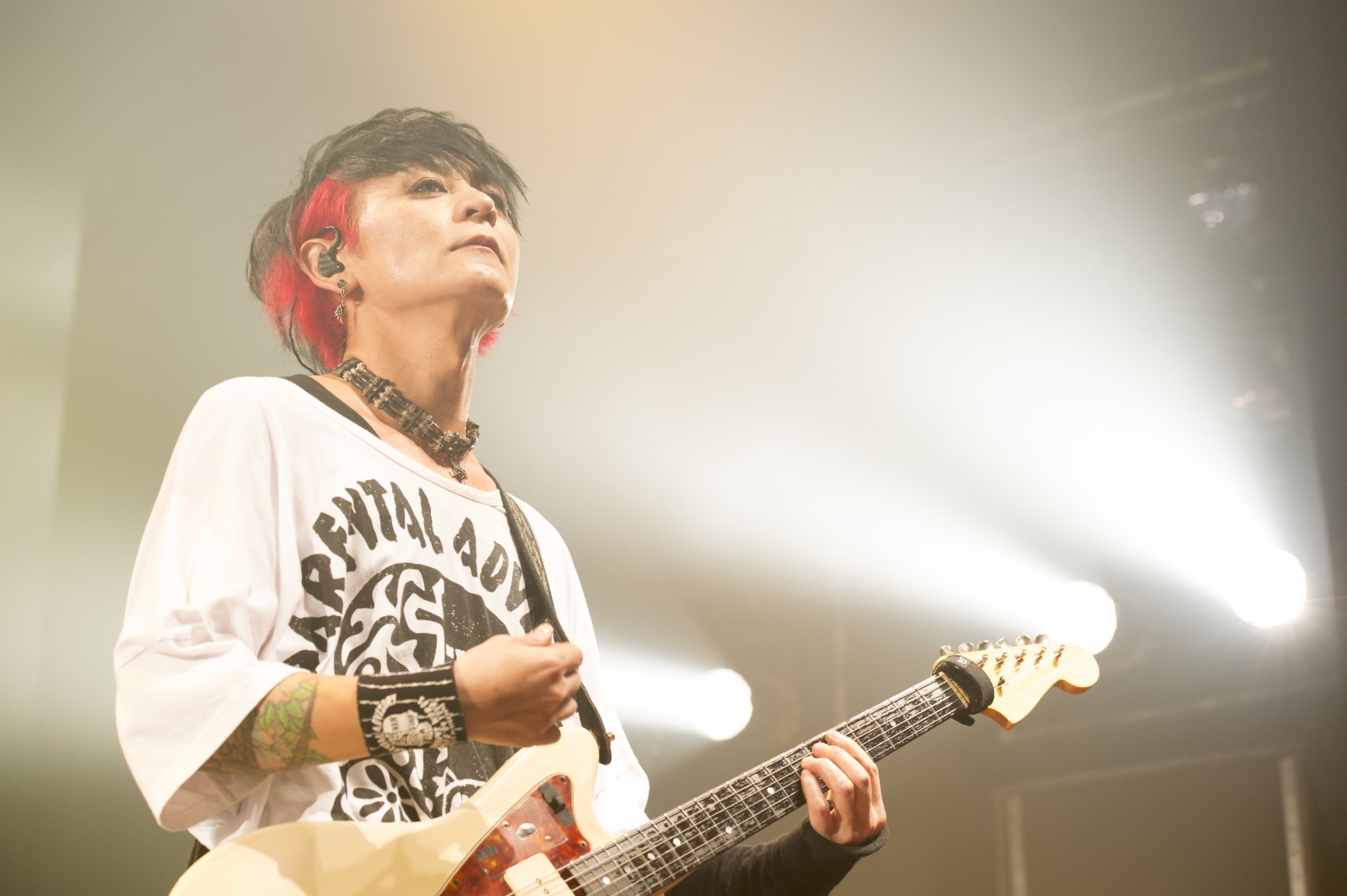 Following was “Microchipped.” During the song, yuji stepped forward and called for the fans to clap along. Unlike the intense beginning, the chorus and K.A.Z’s guitar phrase at the end were clear and fresh.

The third song was “Death Surf,” which was first performed at VAMPS LIVE 2016 ZEPP FUKUOKA THE FINAL PARTY in May. Fans seemed to have already found their own ways to enjoy the song. The guitar riff resembling the 1960s surf music scene, combined with the different type of drum solo showed another side of the band’s music.

KEN greets the audience, “How are you, O-EAST? Today is the final show for OBLIVION DUST’s Dirty Heat Tour 2016. It’s hot outside, but I hope you make it even hotter!” 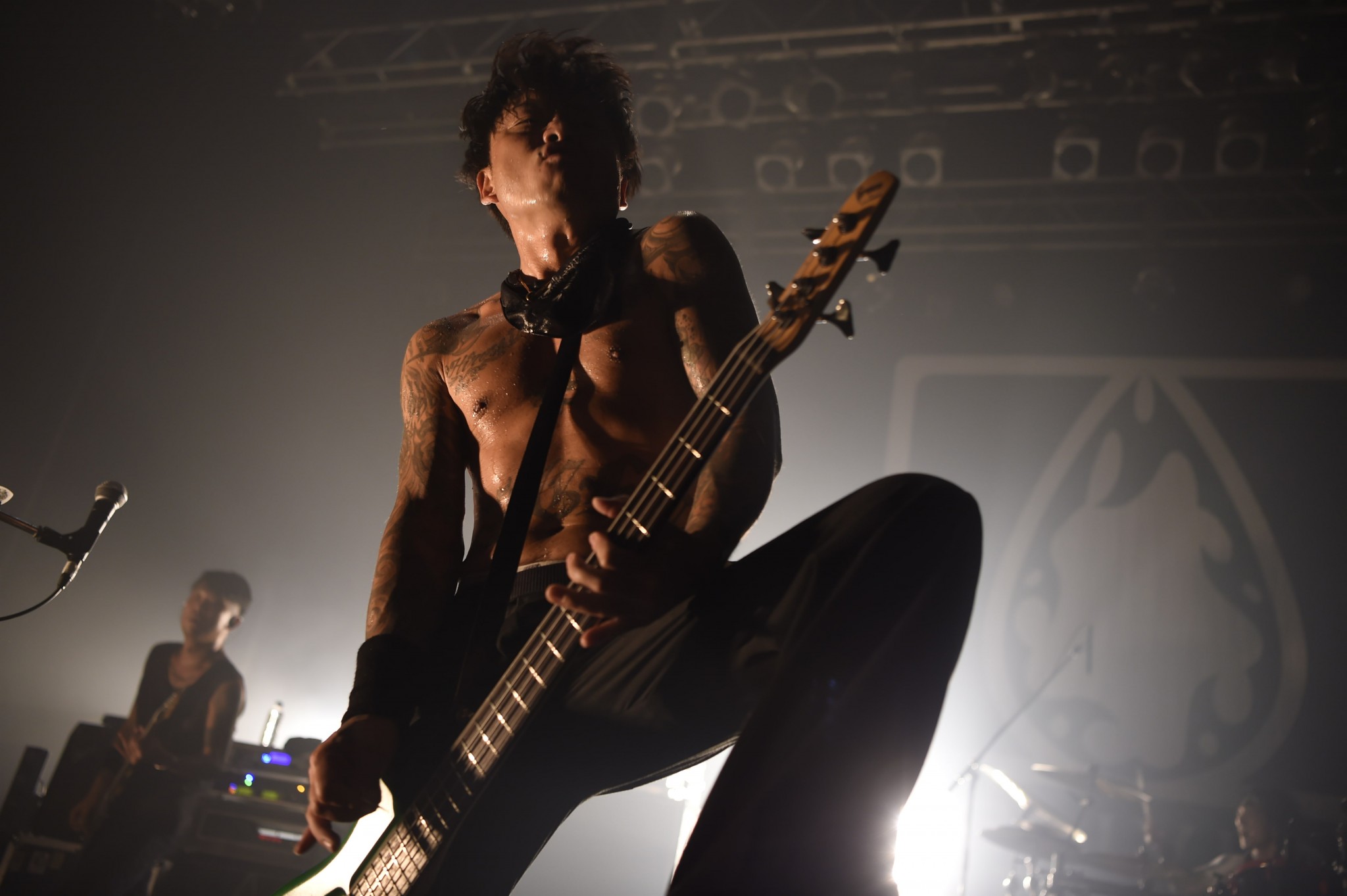 After the fourth song “Syndrome” was “Lolita,” a song with a catchy guitar riff. Contrasting RIKIJI’s intense head banging was K.A.Z’s light, casual moves. The crumbling darkness of the instrumental part pulled out the deepness of the track.

A loud roar arose from the audience as the intro to “S.O.S” began. RIKIJI, an ultimate entertainer, utilized his bass not just as an instrument, but also as a wonderful performance tool. 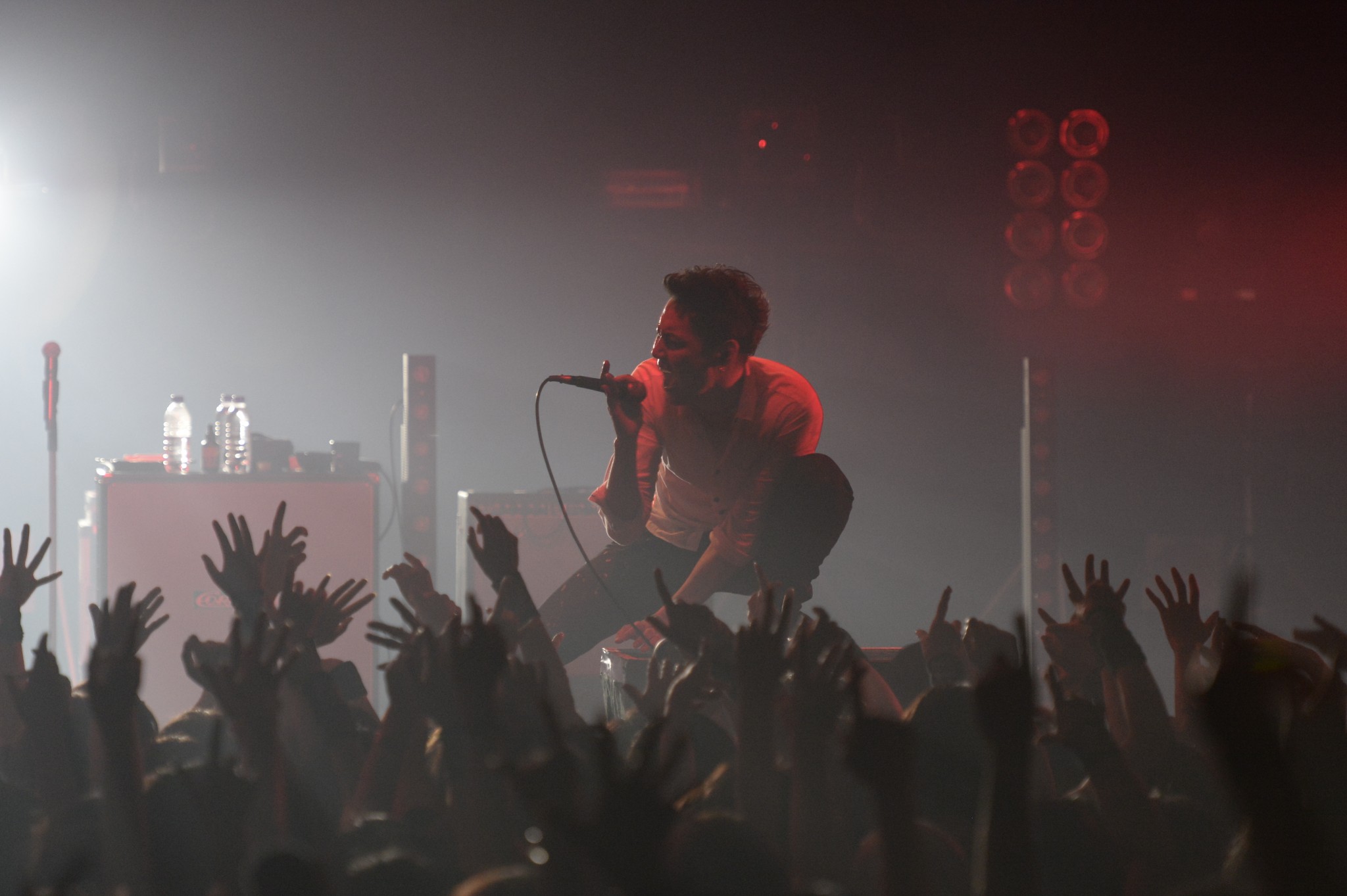 A new song “Nightcrawler” followed. The rebellious phrase “I hate rock n’ roll” will be used as the title for their upcoming tour as well. After KEN’s joke-filled talk was “Caprice,” a song perfect for the summer. This track makes you feel nostalgic of relaxing under the sun during vacation.

The ninth song was “Your Yesterday,” a song that would sound great while watching the sunset. ARIMATSU’s drums echoed throughout the venue. Although the exotic feeling continued, the following “No Regrets” incorporated rap-styled vocals, creating a completely different atmosphere.

Just prior to another quick talk was “Goodbye.” It was hard to believe that the band had been on an intense tour after hearing KEN’s beautiful vocals. The show continued to accelerate as the band played “Never Ending” and “Under My Skin.” During “DESIGNER FETUS,” fans sang along during the chorus.

The fan-favorite “Sail Away” was also filled with great energy. RIKIJI softly grinned as he watched the fans clapping along; some fans high-fived their nearby friends.

A disco ball shined the venue during “Evidence” as K.A.Z’s guitar solo pulled out another side of his musical talent. The following song “Haze” seemed even more energetic than when it was performed at the end of last year. The venue seemed almost like an intensified dance scene.

The last song was “Sink The God.” Fans screamed in excitement as K.A.Z spun his guitar. Only a true rock band can bring such a wild song at the very end. Members and fans both let out everything, for it was the final song of the tour.

OBLIVION DUST will be holding another tour later this year, celebrating their 20th anniversary. If you’ll be visiting Japan during the winter, I definitely recommend checking them out!

OBLIVION DUST consists of KEN LLOYD on vocals, K.A.Z on guitar and programming, and RIKIJI on bass. They are an alternative rock band based in Japan, but with musicianship that can easily compete at a global level.

KEN LLOYD’s English lyrics combined with the destructiveness of their speeding songs breaks the conventional boundaries of J-Pop. Ever since their formation in 1996, the band has released music and held performances that influence fans and other musicians alike. OBLIVION DUST continues to hold a distinct position n the Japanese rock scene.

RIKIJI left the band on December 23, 2000. The following year, on June 30, 2001, the band disbanded. However, the band reunited in 2007 and held concerts in September of that year. Although the band was unable to act much starting in 2008 due to the members’ other projects, the members got together to hold a headliner show in 2011. Their official fan club “Club OVERDOSE” was founded the same year.