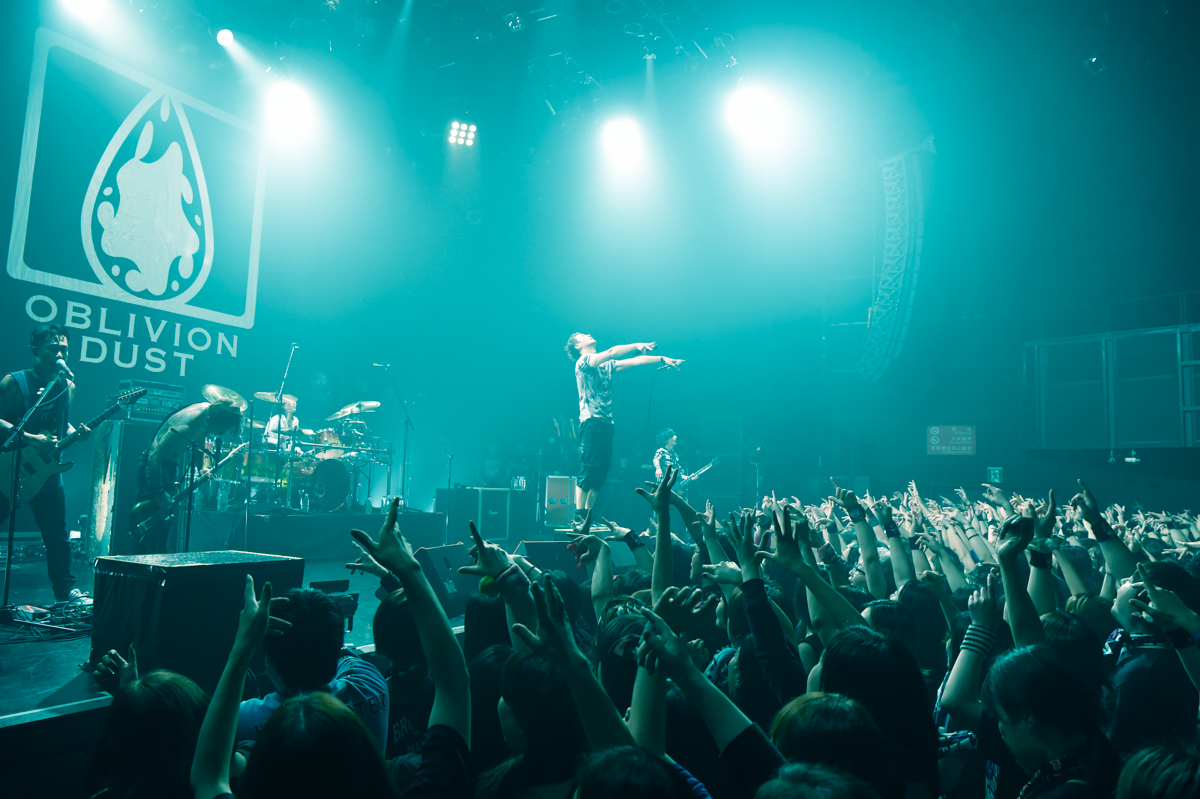 7:30 P.M. The members took the stage as a mechanical intro played in the background. The first number “Radio Song” began with ARIMATSU’s powerful drums. The audience jumped around to the beat, and RIKIJI (bass) answered by adding stomps into his movements. “Radio Song” was the perfect opening number, showing excitement reminiscent of western rock sounds.

The stage lights turned red as the hard rock tune “Microchipped” began. During the exhilarating chorus, some fans began to crowd surf as a mosh pit emerged. During “Never Ending,” the audience sung along as KEN LLOYD (vocals) shouted, “Everybody!” K.A.Z (guitar) and RIKIJI walked over to ARIMATSU’s drum set and fascinated the fans with their intense playing.

“Welcome to OBLIVION DUST’s ‘Live Graffiti!’ Let’s have fun today!” KEN spoke in a joyful manner, which was hard to imagine from the fierce performance the band had been showing.

“Black Tongue” continued, with RIKIJI and yuji (guitar) participating in the chorus parts. Following was “Plastic Wings” from their 1999 album “REBORN,” which pulled out KEN’s beautiful high notes.

The soft sound of K.A.Z’s guitar gently reached the audience. It sounded as if a tender ballad was to begin, but the mood quickly changed into a pure rock tune. This cycle between soft and hard continued, an aspect unique to “Future Womb.”

The seventh number was “Girlie Boy imitation #6,” filled with strong grunge. The members ran around the stage, and the fans responded with great enthusiasm as KEN shouted “Come on!” At the end of the song, RIKIJI held his bass like a rifle and looked over the audience.

After a brief moment to catch his breath, KEN began to speak of how K.A.Z always beats him to the shower and to do hair/makeup. KEN laughed as he mentioned, “He acts so quickly… But only for these kinds of things.”

Following a humorous moment of talk were numbers “All I Need” and “Crazy.” In the latter song, KEN expressed a melancholic love through Japanese lyrics. For their tenth number, the band performed “Disappear,” a classic for old-time OBLIVION DUST fans. During “Girl in Mono,” K.A.Z and ARIMATSU heated up the fans with the high guitar notes and various drum fills.

KEN brought laughter to the audience once again as he revealed his admiration towards the “Wall of Death,” a popular act for rock concerts. “It’s not fun to just imitate younger bands, so why don’t we try out a new kind of Wall of Death? Everyone starts in the center, and runs towards the walls when I say ‘Go!’ Isn’t that fresh?”

Energetic songs such as “Tune” and “Sail Away” continued. The venue turned into a dance floor during “Sail Away,” with the help of RIKIJI’s low bass notes. Fans clapped along in unison, seeming to be having the time of their lives.

“Sink the God” from their album “9 Gates For Bipolar” followed. The number was filled with the band’s true colors, with RIKIJI’s tough bass, K.A.Z’s guitar spinning, and KEN’s passionate vocals.

The performance began to reach the end as KEN showed his feelings of appreciation. “Thank you so much today! OBLIVION DUST fans are always so great!”

The final block started with “Designer Fetus,” and continued on to “Goodbye.” Following was “Haze,” a dance tune with a similar feeling to “Sail Away.” As KEN shouted, “This is the last song!” during “24 Hour Buzz,” the audience let all their final energy out.

“See you in 2016!” said KEN as he and the other members walked backstage. The 18-song performance showed never-ending excitement from both the band and fans alike. I can’t wait to see what the upcoming year will be like for OBLIVION DUST.