This past week I had the opportunity to attend the Ramen Expo USA in Austin, TX. The Ramen Expo USA is an event designed mainly for different businesses in the Japanese ramen industry to create ties and relationships among one another. A main goal of the event is specifically for companies from Japan to establish relationships with those already established in the United States. With a wide variety of businesses there, from manufacturers of toppings, to tableware, to even an automatic gyoza forming machine, the entirety of the ramen industry was very well represented.

While the event was mainly a business-to-business event, there was plenty of public access. The Ramen Expo USA took place over a two-day span, from 10AM to 5PM, the full time being for members of the industry and media, with it being open to the public from 3PM to 5PM. General admission had full access to what the industry/media personnel were experiencing, just not all day, which of course made it easier to get business out of the way earlier in the day and focus on the delicious ramen in the afternoon!

(Let me apologize in advance for some very sub-par photography, lighting was not ideal and my camera was really not listening to me at all that day…)

I myself am an avid ramen eater, but I would definitely not say that I know much about the industry itself. Most of the ramen I’ve eaten in my lifetime so far has been the kind you can make in the microwave… thanks college. (It still tastes good though, let’s be real.) But needless to say, attending this event made me realize how little I actually knew about ramen! That has definitely changed though, thanks to being able to talk to many people at the expo who work in the industry. With 34 different vendors set up throughout the convention center, it was almost impossible to not learn something new!

One of the first companies I got the chance to talk to was Kyoto Katsuobushi Co., Ltd. They manufacture and distribute different ramen seasonings! Their display had giant packages of their varying products, along with flavored fish. There was a bit of a language barrier when I was talking with one of the employees, but he was very kind! I found out that while they did not have a branch in the United States for manufacturing and distributing, they often came on business trips (such as the one they were currently on to visit the expo!) in order to do business. 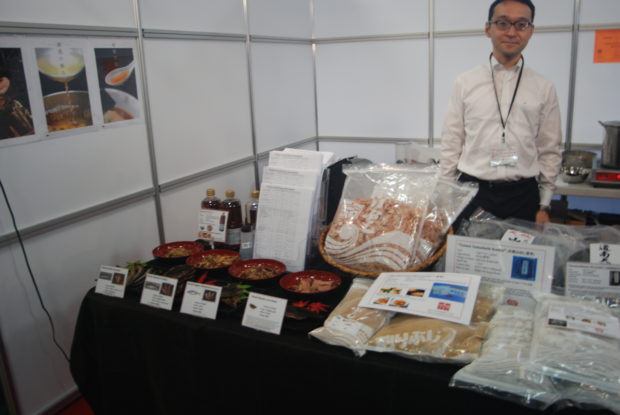 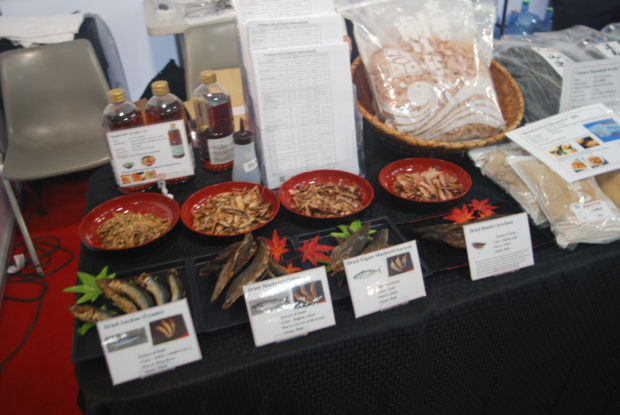 Another vendor I got the chance to talk with was Samurai Noodle, a ramen shop based out of Seattle, Washington with another two locations in Houston, Texas. Unlike the many manufacturers and distributors which were there, Samurai Noodle was a ramen shop which marketed itself as ‘authentic Japanese ramen.’ When I inquired as to what made them consider themselves more authentic than most ramen shops we see here in the United States, one of the staff explained to me that they do their best to never use pre-made ingredients when it comes to making their ramen. Each bowl contains noodles freshly made that day, never manufactured off-site or made in bulk and frozen. Each and every employee is taught every step when it comes to creating a bowl of ramen too, from making the noodles to perfecting the broth. Apparently this causes some healthy competition when it comes to who can make the best noodles!

It was a bit interesting to listen to the employees of Samurai Noodle tell me about how they do not use pre-made ingredients and such, when so many of the other vendors at the expo were manufacturers and distributors of toppings, broths, noodles and such. I was able to try some of their ramen and I have to say that it was very delicious! So whatever works for them, I hope they keep doing it and we see more Samurai Noodle shops pop up around the US! And this very well could happen, because they did mention to me that not only do they train their employees to make great ramen, but they also train them to run the business, and Samurai Noodle is open to partnering with those who want to open their own ramen shop! 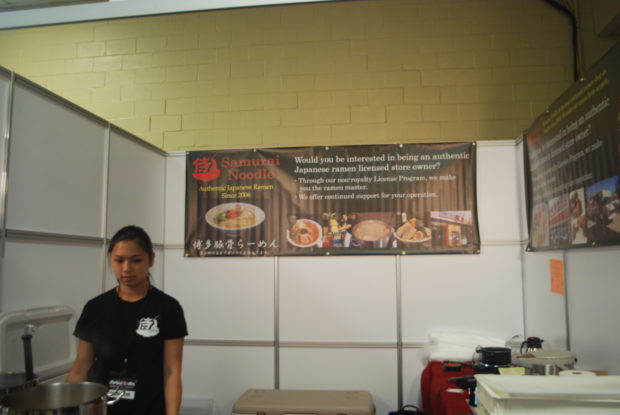 One of the most interesting things I learned at this expo that I never really thought about before is the fact that the noodles are often manufactured and distributed by larger companies to restaurants and grocery stores. My clueless self really thought that each and every ramen shop made their own noodles from scratch every day! Okay, well it’s not really something I ever really thought about, but it was still a bit surprising to learn that that was far from the truth!

I learned a lot about the manufacturing of ramen noodles from the company Sun Noodle, a US based noodle manufacturer. With locations in Hawaii, California, and New Jersey, Sun Noodle is one of those companies I just mentioned that distributes their noodles to restaurants and grocery stores. They make over 200 different kinds of noodles, all of which could last 2 weeks in your refrigerator and 6 months in the freezer! I could keep those noodles for quite a while.. I asked one of the employees about whether it’s the norm for restaurants to order pre-made noodles or not and he told me it was very normal, as the machines used to make noodles in restaurants are generally very small and can make a limited amount of portions per hour, while of course a factory contains much larger machines and can make so much more. 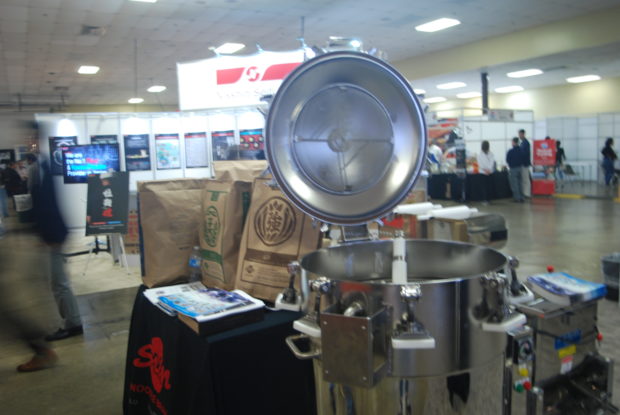 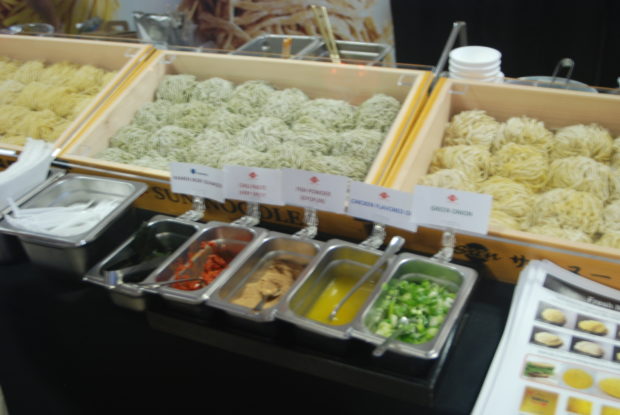 After waiting almost an hour in line to sit down and eat some of the next vendor’s ramen (they actually seated people and cooked the ramen for them on the spot!) Nishiyama Ramen USA, Inc. showcased a vast amount of noodles that they had created. There were so many and we were able to pick which one we wanted to try! I didn’t really know the difference honestly, but someone helped me pick. It was so incredibly delicious and very much worth the hour long wait. Though there definitely was some pressure to eat quickly as they could only seat 4 people at a time, and everyone waiting in line would just stare at you until you finished… I was happy to be able to eat a full bowl of ramen though, after only getting small cups from other vendors! 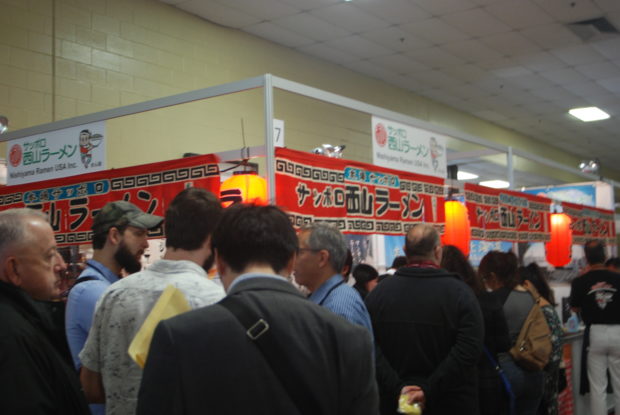 Of course aside from the edible vendors, there were others! There was some very beautiful tableware, chopsticks with cool features at the end to make it a bit easier to pick up noodles (tornado chopsticks are my life now), and even an automatic gyoza forming machine! Watching that work was actually kind of mesmerizing… I want to get one for my home. 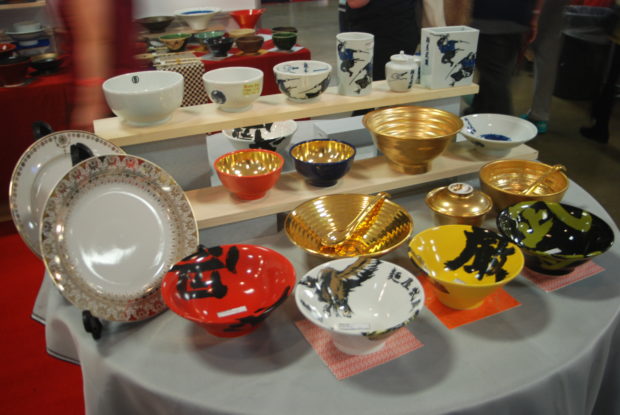 Overall, the Ramen Expo USA was a very cool event. Not only was it really informative, it was also really delicious. By the end of the day I was waddling around, having eaten way too much ramen! But it was a really cool experience to get to learn more about the ramen industry, and not just by googling it. To actually be able to talk to people whose businesses and lives revolved around this industry was really interesting, even for someone who isn’t really involved in the business aspect. To be able to learn about it and just ask questions to practically anyone involved in a specific aspect of the ramen industry was very rewarding!

Next time I go to eat ramen, I’ll definitely be thinking about all the things I learned!

Though it may have already ended, if you’re interested in seeing what other vendors participated in the expo, you can check out the Ramen Expo USA’s website!