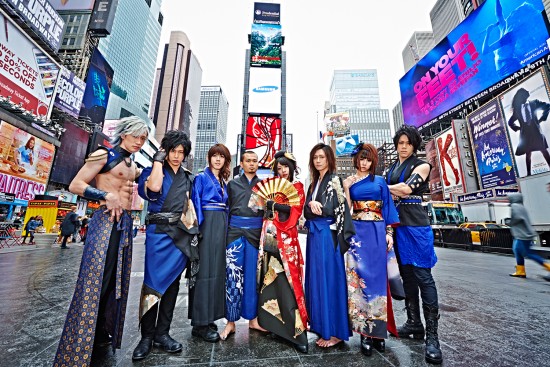 On March 14th, WagakkiBand (和楽器バンド) showcased in New York their one-of-a-kind performance that incorporated Western Rock with Traditional Japanese Performing Arts, bringing to the American crowd a totally fresh entertainment experience. The musicians from Japan drew a packed house at Irving Plaza that night and set the stage ablaze with a well-rounded set list, where their latest original song intermixed with the refreshing ways they interpreted Vocaloid songs. 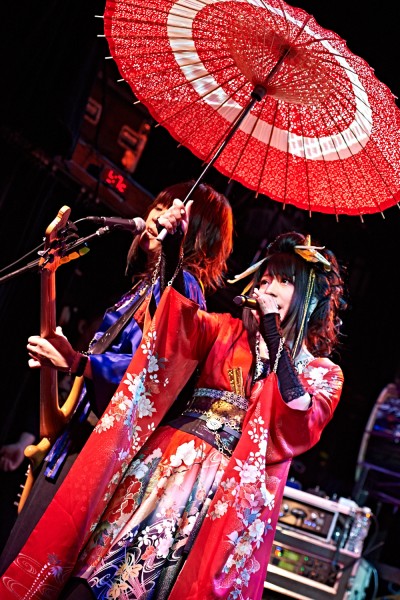 Immersed in pre-concert lighting and sound effects, the darkened venue was wrapped up in incredible excitement, which suddenly transformed into thunderous cheers and screams when each of the eight band members made their grand entrance. After a short intro featuring Yuko’s signature Shigin singing to Kiyoshi’s Koto, WagakkiBand welcomed the New York crowd with the exuberant “Senbonzakura”. Top-class instrumentalists from Japan gathered in WagakkiBand to create a brand new version of this hit Vocaloid song: Bassist Asa, Drummer Wasabi and Kurona on Wadaiko provided the solid pounding rhythm section, while Machiya on Guitar, Kiyoshi on Koto and Beni on Tsugaru Shamisen did a superb job enriching its dynamic with powerful arpeggio. One of the most celebrated Shakuhachi players in Japan, Daisuke jumped around the stage and gave the most energetic backing sound to WagakkiBand’s frontwoman, Yuko Suzuhana. Yuko kept everyone amazed at how perfectly she synthesized the traditional Shigin singing style with a fresh rearrangement of “Senbonzakura”. A beautifully crafted Japanese fan in her hand, the diva enchanted the crowd with seductive gestures and Japanese dancing. The entire audience became frantic; they pumped their fists in the air, headbanging in reaction to the mesmerizing stage presence. 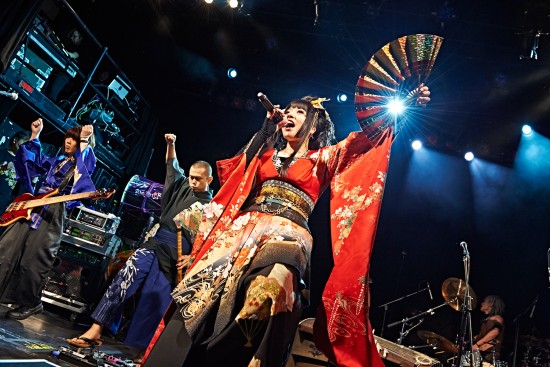 In response to such ecstasy, WagakkiBand performed two other intense songs, “Ikusa” and “Iroha Uta” to help the crowd vent more excitement they had built up while waiting for the band. The atmosphere that the musicians created with Japanese styles was so intense that it was almost tangible. All band members shouted together with immense passion; Machiya adopted many daring poses when showing might on guitar and beckoned the fervent fans to roar louder. 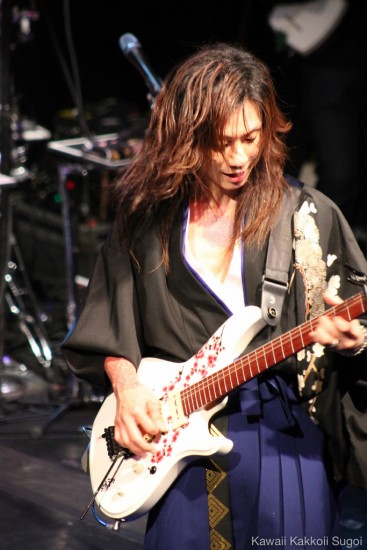 “What’s up New York? Are you having a great time? We are WagakkiBand!” Yuko’s MC followed in fluent English, “Thank you for being here today. We are so excited! This is our first time to play in New York!” Then she introduced their band concept to the New York crowd, “You know what Wagakki means? It means traditional Japanese musical instruments. We fuse Japanese and Western music.” She closed off by stating, “today is a very special day for us! Please enjoy our show!” 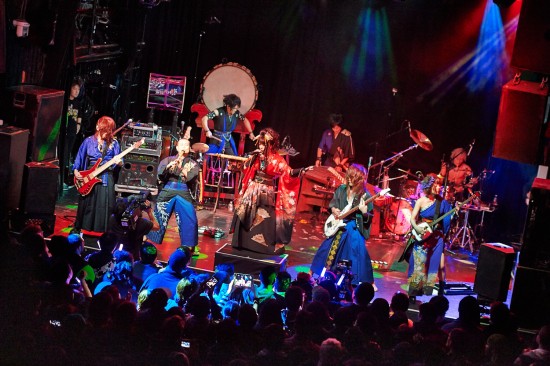 Daisuke and Kiyoshi started the prelude of “Akatsuki no Ito“, the lead track of WagakkiBand’s latest album Yasou Emaki. All members sang the lyrics along with Yuko, “Thoughts of you soar the skies/ Among the floating clouds/ Across the oceans and over rainbows/ Hoping they reach you”, which exactly matched the situation where the band flew all the way from Japan to meet and perform to the U.S audience on the other side of the globe. I believe the band’s thoughts did reach them — when I saw the crowd got so entranced and held up their lights in reaction to such beautiful melody. WagakkiBand literally smashed the language barrier between a Japanese band and the American audience through their exceptional music and stage performance. 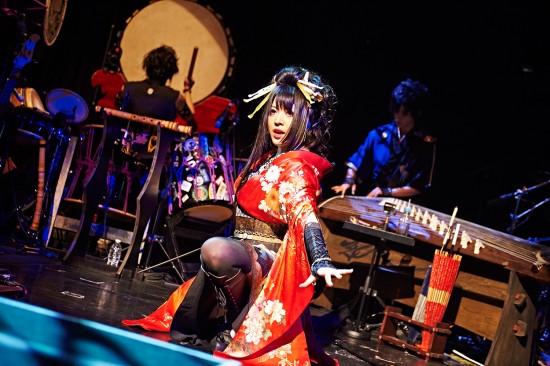 The set continued with several other masterpieces from the band’s portfolio. During the song “Yoshiwara Lament”, a Vocaloid song composed by Asa with a theme about Japanese Geisha, Yuko portrayed the heroine with a red umbrella in her hand and danced beautifully while singing sentimental lyrics. The whole venue could not resist getting entranced into the bittersweet romance delivered from their performance. Iridescent lighting and flowers projected on the backdrop rendered the stage even more surreal in such poetic atmosphere, which made “Yoshiwara Lament” one of the highlights of that night. 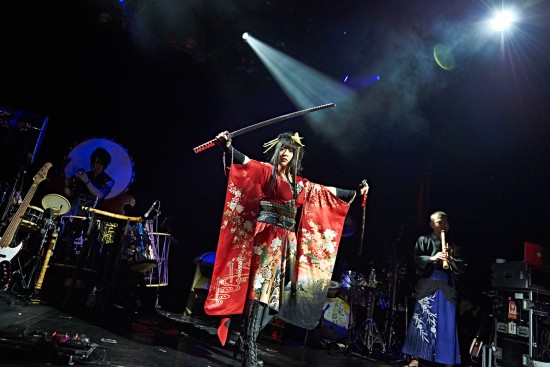 In the second half of the concert, WagakkiBand stirred up hysteria with aggressive songs like “Shiromadara” and “Hangeki no Yaiba”, catapulting everyone into the ecstasy that reverberated through every single corner of the venue. Once again, the audience experienced a stunning fusion that the band managed to make between Western and traditional Japanese sounds. While performing these numbers, the band head-banged in sync and shared an incredibly giant cathartic experience together with the audience, which made it difficult to tell whether this was their very first show in New York. 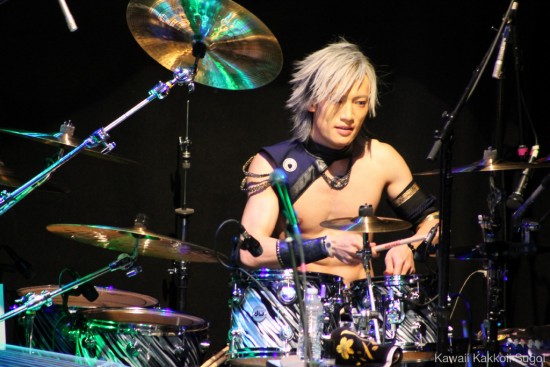 After a Wadaiko and Drums battle performance by Kurona and Wasabi, Yuko with the other members took the stage and commanded the crowd with their cheerful high tempos again. Consecutively beating off songs like “Hoshizukiyo“, “Rokuchounen to Ichiya Monogatari” and “Hanafurumai“, the band members could barely contain their excitement. As they shouted with the audience, Machiya spun around while Kurona stimulated their devoted followers to cheer even louder. When WagakkiBand finished off the final notes of “Hanafurumai”, it would be an understatement to say the energy in the packed venue was intense. 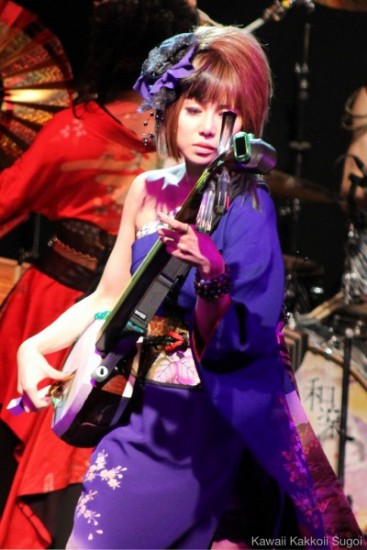 WagakkiBand’s debut performance in New York was a spectacle that integrated diverse audio and visual components, which makes them stand out from all bands you have seen live before. Not only skilled musicians but also professional stage performers, WagakkiBand are well-versed in expressing the beautiful stories behind their songs in a visually striking way. From their exquisite make-up, hair styling, and attire designed to convey the band’s unique concept, to Yuko’s Kenbu (traditional Japanese sword dance) and every member’s solo performance, the band enrich their concerts with every spellbinding detail to show a variety of performing arts. Just as Yuko put it in an interview with us, “WagakkiBand is worth listening to as much as seeing in a live setting, because we are a band with versatility and confident to show you so many special forms of entertainment on stage.” 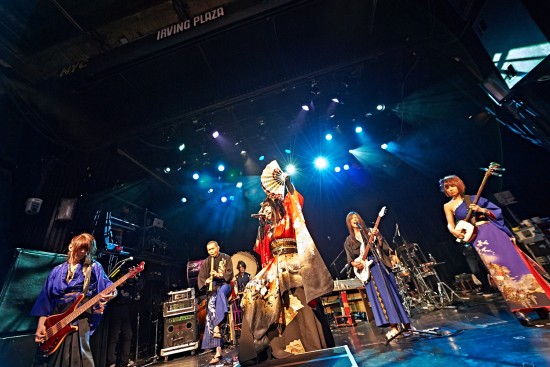 Talented and energetic, WagakkiBand brought all the hopes and dreams to life with their fascinating music and performances. The American music lovers have enough reasons to pay great attention to these brilliant musicians, and WagakkiBand are definitely coming back to rock the U.S again as they promised. 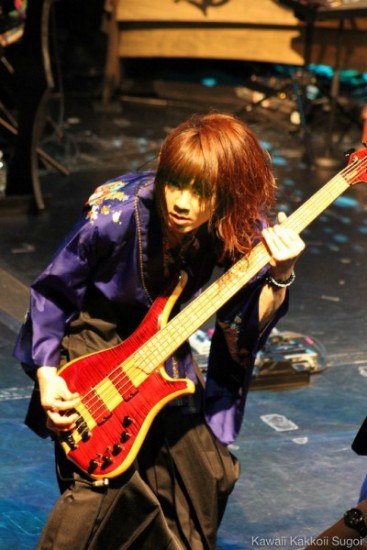 View below the full gallery of WagakkiBand’s Pictures in New York
Or here on Facebook
(Photo Cr: Avex Group and Kathy Villalon)