In western culture, beloved videogame personalities began their exploits on the internet (i.e. Angry Video Game Nerd, Totalbiscuit, Chuggaconroy, etc.) and remain as personalities on the web. Taking this into consideration, one has to wonder why Japan, a country with such a rich video game culture, lacks such a personality. That is because such a personality exists on Japanese television rather than YouTube or NicoNicoDouga.

Shinya Arino, a middle-aged gamer and the other half of the Japanese comedy duo Yoiko, first appeared on T.V. as “Kachou” in short specials where he would complete games and comment while also visiting developers of the games he played. With a premise so plain, it’s hard to imagine the specials becoming any more than it already was. However, on November 4, 2003, Game Center CX (herein referred to as GCCX) aired for the first time on Fuji TV One. The premise remained quite similar to its original inception as specials however GCCX is a full-fledged television program that lasted one hour and challenged Arino-Kachou to complete games for the Famicom [Nintendo Entertainment System]  within a 12-hour limit(he occasionally plays games on the Super Famicom [Super Nintendo Entertainment System] and original Playstation) You may wondering how a show so plain could garner such a large fan base and you may even be surprised to learn that this program has aired for 16 seasons and continues to this day. It has even gotten to the point where members of the Something Awful forum have begun translating episodes and uploading them to Youtube for a western audience to enjoy. The biggest factor in the success of GCCX is Arino-Kachou, the character.

Many will question the appeal of watching a middle-aged man struggle through old video games and when fans were questioned to why they continue to watch GCCX, they would almost universally answer with something along the lines of “his unyielding spirit”. However, this is not entirely true as Arino-Kachou has yielded to his fair share of unforgiving Famicom games but not without a fight. If I were to be asked what part of this Arino-Kachou character appealed to me the most, I would answer, “His ability to recreate childhood memories of trying to beat an especially tough game.”  While Arino-Kachou does not have a completely “unyielding spirit” his endearing mannerisms and ability to never lose his cool makes him an enjoyable character to watch, to empathize with, and to aspire to be. 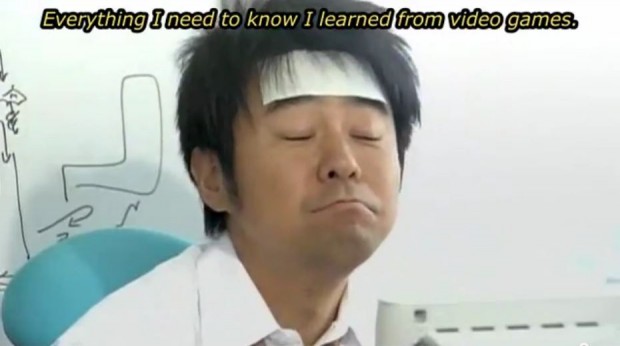 If you are on the fence about whether or not to try GCCX, the most comparable video game personality would be the Angry Video Game Nerd, both for their genuine love of video games and likeable character (Arino-Kachou is considerably less… “animated”, however) . If you enjoyed it, I implore you to buy the Retro Game Master Collection on Amazon (or your online retailer of choice) to support the show and help draw the attention of the producers of this show that it has a sizeable western audience.